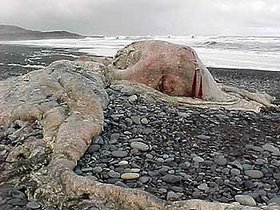 The Chilean Blob was a 13-tonne mass of tissue discovered on a beach in Chile on June 23 2003. Measuring 12 m long, 5.8 m wide and 1.6 m high it was found on a beach near Puerto Montt in Los Muermos by the Chilean Navy. On July 2, European zoologists contacted by the Chileans said it might be an Octopus giganteus, a rare, possibly mythical, giant octopus whose remains were first seen in 1896 in Florida. Samples were sent to laboratories in the United States, France and Italy for DNA testing. On July 11, Chilean scientists announced that it was sperm whale remains.