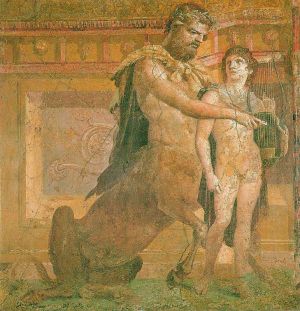 Chiron or Cheiron (Greek: KHEIRON ) was the eldest, wisest and kindest of the Centaurs, a tribe of wild half-horse men. But unlike the rest of this tribe he was an immortal god, a son of the Titan Kronos and so a half-brother of Zeus.

Chiron is the noblest specimen of a combination of the human and animal forms in the ancient works of art; for while the centaurs generally express the sensual and savage features of a man combined with the strength and swiftness of a horse, Chiron, who possesses the latter likewise, combines with it a mild wisdom. Centaurs were notorious for being overly indulgent drinkers and carousers, given to violence when intoxicated, and generally uncultured; Chiron, by contrast, was intelligent, civilized and kind.

According to Apollodorus (i. 2. § 4), Chiron was born to the nymph Philyra, whose coupling with Kronos was interrupted by the sudden appearance of the Titan's wife. To escape her notice he transformed himself into a horse, and sired this half-equine son. Some sources speculate that Chiron was originally a Thessalian god, later subsumed into the Greek pantheon as a centaur.

Chiron had been instructed by Apollo and Artemis, and was renowned for his skill in hunting, medicine, music, gymnastics, and the art of prophecy. (Xen. Cyneg. 1; Philostr. Her. 9, Icon. ii. 2; Pind. Pyth. ix. 65.). Chiron was also a great teacher, and in his Pelian cave he mentored many great heroes including Jason, Peleus, Asklepios, Aristaios and Achilles.

Chiron married the nymph Chariclo who bore him three daughters, Hippe (Melanippe or Euippe), Endeis, and Ocyrhoe, and one son Carystus. His daughter Endeis was the mother of Peleus. (Apollod. iii. 12. § 6.) Chiron, his wife and children lived on Mount Pelion and, like the other centaurs, were expelled by the Lapithae; but sacrifices were offered to him there by the Magnesians until a very late period, and the family of the Cheironidae in that neighbourhood, who were distinguished for their knowledge of medicine, were regarded as his descendants.

Chiron had been poisoned with an arrow belonging to Heracles that had been treated with the blood of the Hydra. (In other versions, poison Chiron had given to the hero when he had been under the honorable centaur’s tutelage.) This had taken place during the visit of Heracles to the cave of Pholus on Mount Pelion in Thessaly when he visited his friend during his fourth labour in defeating the Erymanthian Boar. While they were at supper, Heracles asked for some wine to accompany his meal.

Pholus, who ate his food raw, was taken aback. He had been given a vessel of sacred wine by Dionysus sometime earlier, to be kept in trust for the rest of the centaurs until the right time for its opening. At Heracles's prompting, Pholus was forced to produce the vessel of sacred wine. The hero, gasping for wine, grabbed it from him and forced it open. Thereupon the vapours of the sacred wine wafted out of the cave and intoxicated the wild centaurs, led by Nessus, who had gathered outside.

They attacked the cave with stones and fir trees. Heracles was forced to shoot many arrows (poisoned, of course, with the blood of the Hydra) to drive them back. During this assault, Chiron was hit in the thigh by one of the poisoned arrows. After the centaurs had fled, Pholus emerged from the cave to observe the destruction. Being of a philosophical frame of mind, he pulled one of the arrows from the body of a dead centaur and wondered how such a little thing as an arrow could have caused so much death and destruction. In that instant, he let slip the arrow from his hand and it dropped and hit him in the foot, killing him instantly.

Ironically, Chiron, the master of the healing arts, could not heal himself, so he willingly gave up his immortality and was placed in the sky, for the Greeks as the constellation Sagittarius, and in modern times represented by the constellation of the southern hemisphere, Centaurus.

Part of this article consists of modified text from Wikipedia, and the article is therefore licensed under GFDL.
Retrieved from "https://www.monstropedia.org/index.php?title=Chiron&oldid=14963"
Categories: