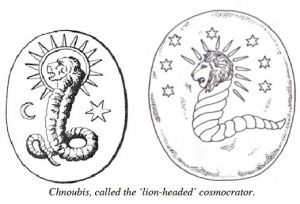 Chnoubis is an hybrid monster in Egyptian Gnose.

Chnoubis is depicted with the head of a lion and the body of a serpent, usually with seven rays emanating from the head, sometimes, with the twelve zodiacal signs.

Images of Chnoubis are most often found inscribed on gnostic gems, and amulets for protection against poison and disease, that date from the first century onward.

Chnoubis is an aspect of the Gnostic Demiurge, Yaldabaoth, and is associated with Abraxas. The lion’s head represents the solar forces, enlightenment; the serpent, the lower impulses, earth.