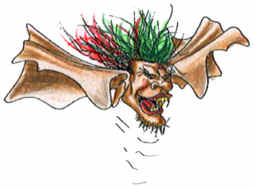 The Chonchon is a mythical bird of the Mapuche mythology, also present in the Chilean and southern Argentinan folkore.

Chonchón is from the language mapudungun.

The Chonchon has the shape of a human head with feathers and talons; its ears, which are extremely large, serve as wings for its flight on moonless nights. They are known for their cry of "tue tue tue" during their flights.

The Chonchon is the magic transformation of the powerful kalkus (mapuche sorcerer), that knows the secret of the Kalkus, to become this feared creature. Chonchons are supposed to be endowed with all the magic powers of and can only be seen by other kalkus, or by wizards that want this power. The kalku or the sorcerer would carry out the transformation in Chonchon being anointed by a magic cream in the throat that makes his head removed from the rest of the body, and his head become this creature

The Chonchon is considered a mythical bird that announces "bad luck", and the form in that the kalkus use to carry out easily their wicked activities.

Part of this article consists of modified text from Wikipedia, and the article is therefore licensed under GFDL.
Retrieved from "https://www.monstropedia.org/index.php?title=Chonchon&oldid=11611"
Categories: