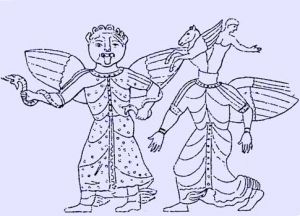 In Greek mythology, Chrysaor (Greek Χρυσάωρ = "He who has a golden sword") was a giant, the son of Poseidon and Medusa.

Chrysaor was conceived on the floor of a temple to Athena who, enraged at the desecration, turned Medusa into a Gorgon. As such, Chrysaor and his brother, the winged horse, Pegasus sprang from Medusa's neck as Perseus beheaded her. Chrysaor is said to have been king of Iberia (Spain and Portugal).

Chrysaor had one son, Geryon, from Callirhoe, daughter of Oceanus.

"Chrysaor, married to Callirhoe, daughter of glorious Oceanus, was father to the triple-headed Geryon, but Geryon was killed by the great strength of Herakles at sea-circled Erytheis beside his own shambling cattle on that day when Herakles drove those broad-faced cattle toward holy Tiryns, when he crossed the stream of Okeanos and had killed Orthos and the oxherd Eurytion out in the gloomy meadow beyond fabulous Okeanos." - Hesiod, Theogony 287

"The ancient writers seem to call the Baetis [a river in southern Spain, now called Guadalquivir ] Tartessos, and Gadeira [Gades, now Cadiz ] and the nearby island Erytheia. This, it is supposed, is why Stesichorus could say of Geryon's herdman [Eurytion] that he was born almost opposite famous Erytheia .. by the limitless silver-rooted [with reference to the silver mined in the region] waters of the river Tartessos in the hollow of a rock." - Greek Lyric III Stesichorus, Geryoneis Fragment S7 (from Strabo, Geography).

Chrysaor was also the golden sword of Sir Artegal, the Knight of Justice, from Edmund Spenser's The Faerie Queen. The sword was given to him by Astræa, who had been holding it since the days when Jove used it against the Titans. Because it was "Tempred [sic] with Adamant", it could cleave through anything.