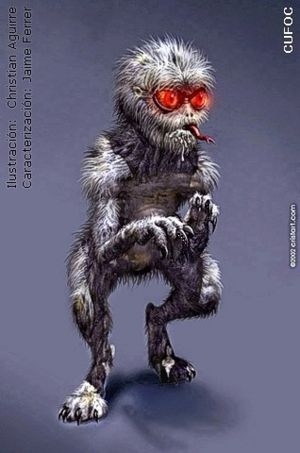 The chupacabra (or chupacabras) is a creature said to inhabit parts of the Americas. Sightings began in Puerto Rico in the early 1990s, and have since been reported as far north as the Carolinas, and as far south as Chile. Though some argue that the chupacabras may be real creatures, mainstream scientists and experts generally contend that the chupacabra is a mythological creature, or a type of urban legend.

The name translates literally from Spanish as "goat-sucker." The name can be preceded by the masculine definite article ("el chupacabras"), or the plural masculine article ("los chupacabras"). It comes from the creature's reported habit of attacking and drinking the blood of livestock. The term was supposedly coined by Puerto Rican television personality Silverio Pérez, who intended the name to be a joke. This claim is doubtful, since the word had already been used in Michael Crichton's 1990 novel Jurassic Park, making an earlier origin more likely.its also really creepy

Although they have different appearances, chupacabra descriptions have several common traits. They are typically described as being 3 ft. (1 m) or taller, and roughly humanoid in shape.

Usually, Chupacabras are said to appear in three specific forms:

Some reports claim the chupacabra's red eyes have the ability to hypnotize and paralyze their prey—leaving the prey animal mentally stunned, allowing the chupacabra to suck the animal's blood at its leisure. The effect is similar to the bite of the vampire bat, or of certain snakes or spiders that stun their prey with venom. Unlike conventional predators, the chupacabras sucks all the animal's blood (and sometimes organs) through a single hole or two holes.

The legend of el chupacabra began in about 1992, when Puerto Rican newspapers El Vocero and El Nuevo Dia began reporting the killings of many different types of animals, such as birds, horses, and as its name implies, goats. At the time it was known as El Vampiro de Moca since some of the first killings occurred in the small town of Moca. While at first it was suspected that the killings were done randomly by some members of a Satanic cult, eventually these killings spread around the island, and many farms reported loss of animal life. The killings had one pattern in common: each of the animals found dead had two punctured holes around their necks.

Soon after the animal deaths in Puerto Rico, other animal deaths were reported in other countries, such as the Dominican Republic, Argentina, Bolivia, Chile, Colombia, El Salvador, Panama, Peru, Brazil, the United States and, most notably, Mexico.

Both in Puerto Rico and Mexico, "el chupacabra" gained urban legend status. Chupacabra stories began to be released several times in American and Hispanic newscasts across the United States, and chupacabra merchandise, such as t-shirts and baseball hats, were sold.

The first reported attacks occurred in March 1995 in Puerto Rico. In this attack, eight sheep were discovered dead, each with three puncture wounds in the chest area and completely drained of blood.

In July of 2004, a rancher near San Antonio, Texas, killed a hairless, dog-like creature which was attacking his livestock. This creature is now known as the Elmendorf creature. It was later determined to be a canine of some sort, most likely a coyote, with demodectic mange. In October of 2004, two animals which closely resemble the Elmendorf creature were observed in the same area. The first was dead, and the second was noticed by a local zoologist who was called to identify the animal while she was travelling to the location where the first was found. Specimens were studied by biologists in Texas. The creatures are thought to have been canines of undetermined species with skin problems and facial deformities.

In Coleman, Texas, a farmer named Reggie Lagow caught an animal in a trap he set up after the deaths of a number of his chickens and turkeys. The animal was described as resembling a mix of hairless dog, rat, and kangaroo. Lagow provided the animal to Texas Parks and Wildlife officials for identification, but Lagow reported in a September 17, 2006 phone interview with John Adolfi, founder of the Lost World Museum, that the "critter was caught on a Tuesday and thrown out in Thursday's trash." 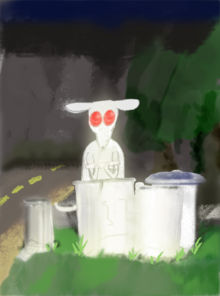 A famous appearance in the city of Varginha, Brazil, (the "Varginha incident") is sometimes attributed to the chupacabra, although cryptozoologists more frequently associate the incident with aliens. In 1997, an explosion of chupacabra sightings in Brazil were reported in Brazilian newspapers. One report came from a police officer, who claimed to get a nauseous feeling when he saw a dog-like chupacabras in a tree.

In April 2006, MosNews reported that the chupacabra was spotted in Russia for the first time. Reports from Central Russia beginning in March 2005 tell of a beast that kills by the animals and sucks out their blood. Thirty-two turkeys were killed and drained overnight. Reports later came from neighboring villages when 30 sheep were killed and had their blood drained. Finally, eyewitnesses were able to describe the chupacabra.

In mid-August 2006, Michelle O'Donnell of Turner, Maine, described an "evil looking" rodent-like animal with fangs that had been found dead alongside a road. The animal was apparently struck by a car, and was unidentifiable. Photographs were taken and witness reports seem to be in relative agreement that the creature was canine in appearance, but in widely published photos seemed unlike any dog or wolf in the area. Photos from other angles seem to show a chow- or akita-mixed breed dog. It was reported that "the carcass was picked clean by vultures before experts could examine it". For years, residents of Maine have reported a mysterious creature and a string of dog maulings.

In May 2007, a series of reports on national Colombia news reported more than 300 dead sheep in the region of Boyaca, and the capture of a possible specimen to be analyzed by zoologists at Universidad Nacional of Colombia.

In August 2007, Phylis Canion found three animals in Cuero, Texas. She and her neighbors purported to have discovered three strange animal carcasses outside Canion's property. She took photographs of the carcasses and preserved the head of one in her freezer before turning it over for DNA analysis. Canion reported that nearly 30 chickens on her farm had been exsanguinated over a period of years, a factor which led her to connect the carcasses with the chupacabra legend. State Mammologist John Young estimated that the animal in Canion's pictures was a Gray Fox suffering from an extreme case of mange. In November 2007, biology researchers at Texas State University–San Marcos determined from DNA samples that the suspicious animal was merely a coyote.

On January 11, 2008, a sighting was reported at the province of Capiz in the Philippines. Some of the residents from the barangay believed that it was the chupacabra that killed eight chickens. The owner of the chickens saw a dog-like animal attacking his chickens.

The chupacabra has often been spotted in Michigan. A recent sighting occurred in Grand Haven, when a forty-two year old man claimed he saw it suck the blood out of a cat. On July 5, 2008, a 32 year old female was driving with her brights on when she witnessed a strange grey kangaroo like creature digging in a trash bin next to the road in Holly. It appeared to be over 3 feet tall with large glowing red eyes and a long pointy face. The creature reached for the ground with its front arms and jumped forward with its back legs swinging in front of it like a rabbit before it disappeared into the woods. 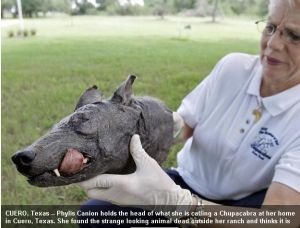 On August 8, 2008, a DeWitt County deputy, Brandon Riedel, filmed an unidentifiable animal along back roads near Cuero, Texas on his dashboard camera. The animal was about the size of a coyote but was hairless with a long snout, short front legs and long back legs. However, Reiter's boss, Sherrif Jode Zavesky, believes it may be the same species of coyote identified by Texas State University–San Marcos researchers in November 2007. 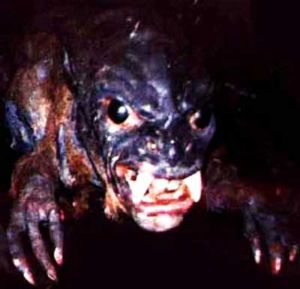 At the height of the chupacabra craze, there were many "Goatsucker Home Pages" on the Internet. The web site of radio host Art Bell posted an alleged photograph of a living chupacabra, depicting a creature later exposed as a statue from a museum exhibit.