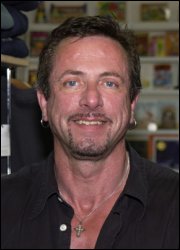 Before reaching college, he went to all the same schools as musician John Lennon, something that he has often boasted of. He studied English and Philosophy at Liverpool University.

Barker is one of the leading authors of contemporary horror/fantasy, starting out with pure horror writing early in his career, mostly in the form of short stories (collected in Books of Blood 1 - 6), and the Faustian novel The Damnation Game (1986). Later he moved towards epic modern-day fantasy and urban fantasy with some horror elements in Imajica (1991) and Sacrament (1996). Barker's distinctive style is characterized by the notion of hidden fantastical worlds existing side by side with our own (an idea he shares with contemporary Neil Gaiman), the role of sexuality in the supernatural and the construction of coherent, complex and detailed mythologies. Barker has referred to this style as "dark fantasy" or the "fantastique".

When the Books of Blood were first published in the United States in cheap paperback editions, the originality, intensity and overall quality of the stories led popular author Stephen King to say of Barker: "I have seen the future of horror and its name is Clive Barker."

Barker has a keen interest in movie production, although his movies have received varying acclaim. The most successful was 1987's Hellraiser, based on his novella The Hellbound Heart. His early movies, the shorts The Forbidden and Salome, are experimental art movies with surrealist elements, now rereleased together, to moderate critical acclaim. After his film Nightbreed, which was widely considered to be a flop, Barker returned to write and direct Lord of Illusions. He is currently working on a series of movie adaptations of his The Abarat Quintet books, under Disney's management. He is also developing a film based on his Tortured Souls line of toys from McFarlane Toys.

A short story titled The Forbidden from Barker's In the Flesh provided the basis for the film Candyman and its two sequels.

He has also produced the film Gods and Monsters which received major critical acclaim.

Barker is also a prolific and talented visual artist, working in a variety of media, often illustrating his own books. His paintings can be seen on the covers of the collections of his plays, Incarnations (1995) and Forms of Heaven (1996), as well as on the second printing of the original UK publications of his Books of Blood series. His artwork has been exhibited at the Bess Cutler Gallery in New York and La Luz De Jesus in Los Angeles. Many of his sketches and paintings can be found in the collection Clive Barker, Illustrator, published in 1990 by Arcane/Eclipse Books. He also worked on the creative side of a horror computer game, Clive Barker's Undying, also providing the voice for the character Ambrose, a homicidal maniac who is never without his enormous axe. Undying was developed by DreamWorks Interactive and released in 2001 to moderate success and acclaim. Barker also provided the artwork for his young adult novel The Thief Of Always (1992) as well as the Abarat series.

A longtime comics fan, Barker achieved his dream of publishing his own superhero books when Marvel Comics launched the Razorline imprint in 1993. Based on detailed premises, titles and lead characters he created specifically for this, the four interrelated titles — set outside the Marvel universe — were Ectokid (written first by James Robinson, then by future Matrix co-creator Larry Wachowski, with art by Steve Skroce), Hokum & Hex (written by Frank Lovece, art by Anthony Williams), Hyperkind (written by Fred Burke, art by Paris Cullins) and Saint Sinner (written by Elaine Lee, art by Max Douglas). A 2002 Barker telefilm titled Saint Sinner bore no relation to the comic.

Barker horror adaptations and spin-offs in comics include the Marvel/Epic series Hellraiser, Nightbreed, Pinhead, The Harrowers, Book of the Damned and Jihad; Eclipse Books' series and graphic novels Tapping The Vein, Dread, Son of Celluloid, Revelations The Life of Death, Rawhead Rex and The Yattering and Jack; and Dark Horse Comics' Primal, among others.

A play is narrated by the ghost of Maria, a fan dancer/palm reader/whore. Deposed Latin American dictator Perez cowers in the laboratory of Dr. Joseph Frankenstein after a revolutionary coup. The rebel leader is El Coco (“The Boogeyman”), one of Dr. Frankenstein’s experiments, constructed of body parts from various corpses. He is literally a divided man; when Maria reads his palm, she finds one fortune on his left hand and another on his right. With the help of Cockatoo, El Coco becomes President despite an addiction to heroin and the fact he’s a cannibal. El Coco falls in love with Veronique, then he gets killed though he gets reanimated in the second act. Meanwhile Dr. Frankenstein declares his love for Veronique, designed to bear immortal children, forming a love triangle of the creator and his creations.

Barker has been openly gay since the early 1990s, first mentioning his dating life to US audiences in the pages of The Advocate magazine. He currently lives in Los Angeles, CA, with his partner, photographer David Armstrong, and Armstrong's daughter

Part of this article consists of modified text from Wikipedia, and the article is therefore licensed under GFDL.
Retrieved from "https://www.monstropedia.org/index.php?title=Clive_Barker&oldid=8159"
Categories: