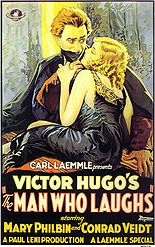 The Man Who Laughs

Comprachicos (also Comprapequeños and Cheylas) refers to various groups in folklore who were said to change the physical appearance of human beings by manipulating growing children, in a similar way to the horticultural method of bonsai

Comprachicos is a compound Spanish neologism meaning "child-buyers," which was coined by Victor Hugo in his novel The Man Who Laughs.

The most common methods said to be used in this practice included stunting children's growth by physical restraint, muzzling their faces to deform them, slitting their eyes, dislocating their joints, and malforming their bones. The resulting human monsters made their living as mountebanks or were sold to lords and ladies to be used as pages or court fools.

One of the common creations of the Comprachicos was supposed to be artificial dwarfs, formed "by anointing babies' spines with the grease of bats, moles and dormice" and using drugs such as "dwarf elder, knotgrass, and daisy juice".

Other means of creating this result were conjectured to include physical stunting by breaking or dislocating bones, and forcible constrainment, whereby growth was inhibited for a long enough period to create permanent deformation. Because of the demand for dwarfs and other novelties in the courts of kings at this time, this could have been a profitable occupation.

Victor Hugo's novel The Man Who Laughs is the story of a young aristocrat kidnapped and disfigured by his captors to display a permanent malicious grin. At the opening of the book, Hugo provides a description of the Comprachicos:

The Comprachicos worked on man as the Chinese work on trees. A sort of fantastic stunted thing left their hands; it was ridiculous and wonderful. They could touch up a little being with such skill that its father could not have recognized it. Sometimes they left the spine straight and remade the face. Children destined for tumblers had their joints dislocated in a masterly manner; thus gymnasts were made. Not only did the Comprachicos take away his face from the child; they also took away his memory. At least, they took away all they could of it; the child had no consciousness of the mutilation to which he had been subjected. Of burnings by sulphur and incisions by the iron he remembered nothing. The Comprachicos deadened the little patient by means of a stupefying powder which was thought to be magical and which suppressed all pain.