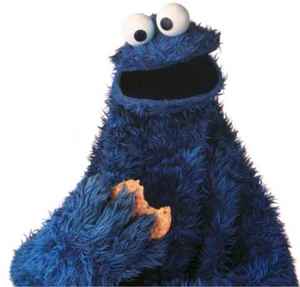 Cookie Monster is a small bipedal monster covered with thick blue fur, and gifted with a voracious appetite.

Cookie Monster is best known for his voracious appetite and his famous eating phrases: "Me want cookie!", "Me eat cookie!", and "Omm nom nom nom" (said through a mouthful of food). He often eats anything and everything, including danishes, donuts, and inedible objects such as salt and pepper shakers, napkins, telephones, motorcycles, and the four letters in the word "food". Once, he even attempted to eat Guy Smiley.

He is known to have a mother, a younger sister, and an identically-designed cousin, who all share his characteristic blue fur and "googly eyes". He also has a father, who appeared in a Monsterpiece Theater sketch promoting energy conservation, water conservation and environmentalism. Both Cookie Monster's mother and father share his enormous appetite. 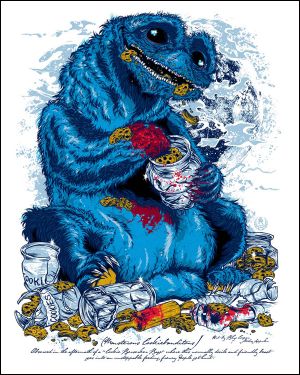 In 1966, Henson drew three monsters that ate cookies and appeared in a General Foods commercial that featured three crunch snack foods: Wheels, Crowns and Flutes. Each snack was represented by a different monster. The Wheel-Stealer was a short, fuzzy monster with wonky eyes and sharply pointed teeth. The Flute-Snatcher was a speed demon with a long, sharp nose and windblown hair. The Crown-Grabber was a hulk of a monster with a Boris Karloff accent and teeth that resembled giant knitting needles.

These monsters had big appetites for the snack foods they were named after. Each time the Muppet narrator, a human-looking fellow, fixes himself a tray of Wheels, Flutes and Crowns, they disappear before he can eat them. One by one, the monsters sneak in and zoom away with the snacks. Frustrated and peckish, the narrator warns viewers that these pesky monsters could be disguised as someone in your own home, at which point the monsters briefly turn into people and then dissolve back to monsters again.

As it turns out, these commercials were never aired — but all three monsters had a future in the Muppet cast. The "Crown-Grabber" was used in an Ed Sullivan Show sketch, in which he ruins a girl's beautiful day. Known from then on as the Beautiful Day Monster, he made a number of appearances on Sesame Street and The Muppet Show. The "Flute-Snatcher" turned into Snake Frackle, a background monster from The Great Santa Claus Switch and The Muppet Show. For nearly 30 years, Henson and puppeteer Frank Oz were an extraordinary team. Cheryl Henson, Jim's daughter and the president of the Jim Henson Foundation, says the two men shared a subversive sense of humor

In 1967, Henson used the "Wheel-Stealer" puppet for an IBM training film called Coffee Break Machine. In the sketch, the monster (with frightening eyes and fangs) devours a complex machine as the machine describes its purpose and construction. At the end of the sketch, the talking machine explains that its primary purpose is to produce the greatest explosion known to man. The monster promptly explodes. This sketch was also performed in October, 1967 on The Ed Sullivan Show. (It was also later performed on the George Burns episode of The Muppet Show using the Luncheon Counter Monster.)

Two years later, Henson pulled the puppet out of the box again for three commercials selling Munchos, a Frito-Lay potato chip. This time, the puppet was called Arnold, the Munching Monster. After the three ads were produced, Henson had the opportunity to renew the contract. He chose not to, because at that point he was working on Sesame Street — and that monster puppet was moving on to the next stage in his career.

Cookie Monster, still unnamed, made his Sesame Street debut in the first episode, interfering with Kermit the Frog's "famous W lecture" by eating a model "W" bit by bit (turning it into an "N", a "V", and finally an "I", to Kermit's frustration). Enter . . Their Muppets were regulars on The Ed Sullivan Show and The Tonight Show.

It was later, on a Muppet game show, that the cookie-fixated creature we know emerged, puppeteer Frank Oz says. The winning contestant was offered the chance to choose a prize: a vacation, a new house, $10,000 cash, or a cookie. He chose the cookie — and the Cookie Monster was born.

"As opposed to many of us who need many things to try and make us happy, he only needs one thing, and that's a cookie," Oz says. "That is his one obsession, and he's insatiable."

Though Cookie Monster was the improvisational brainchild of several writers, producers and puppeteers, Oz is most often credited for his existence. The puppeteer, who also created Miss Piggy and Bert, was known for taking character development seriously — often refusing to break out of Cookie Monster's voice during writing sessions.

Cookie Monster's theme song, "C is for Cookie", is one of the most famous songs from Sesame Street.

In 2006, in response to growing concerns about record levels of childhood obesity in the U.S.A., Sesame Street began airing segments entitled Healthy Habits for Life. In these segments, the Muppet characters of Sesame Street talk about healthy habits, such as eating properly and exercising. Hootsy the Owl serenaded him with a little ditty called "A Cookie Is a Sometimes Food." The Healthy Habits for Life segments spawned false Internet rumors that Cookie Monster's name had been changed to Veggie Monster or would be taken off the show entirely.

It wasn't true, but angry fans inundated the Sesame Workshop with letters, and more than 3,000 people signed an online petition.

"What's wrong with you people?" one of them wrote, "To quote the monster himself: 'C is for Cookie, and that's good enough for me!'"

In a 2007 appearance on Martha Stewart's TV program, Cookie Monster explained his new philosophy that "Cookies are a sometime food."

Numerous children's books featuring Cookie Monster have been published over the years:

Part of this article consists of modified text from Wikipedia, and the article is therefore licensed under GFDL.
Retrieved from "https://www.monstropedia.org/index.php?title=Cookie_Monster&oldid=16430"
Categories: