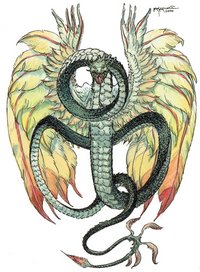 In the Dungeons & Dragons fantasy role-playing game, the couatl is a large serpentine creature that lives in warm jungles, and is considered a native outsider. A couatl is always lawful good.

A couatl resembles a long, feathered serpent with a pair of rainbow-feathered wings that allow it to fly. Its powerful mind is capable of great psionic might.

Couatls are usually solitary, though they will sometimes gather in small groups. They are highly dedicated to an asexual deity named Jazirian, though they have no true priests among their ranks, as Jazirian grants each couatl enough power and wisdom of their own.

"Couatl" is derived from Quetzalcoatl.

Couatl can also refer to a Warcraft III: The Frozen Throne Naga flying unit in the 'Warcraft universe.