The crabman is a mythical hybrid demon in the mythology of the ancient culture [circa 1-750 CE] of the Moche people of Peru.

The crab deity has the head and legs of a human and the carapace, legs, and claws of a crab.

The Ulluchu Man, a enigmatic gilded gold figurine about 50 cm with raised arms, was once mounted on a fabric banner covered with gilded metal plates. He is called Ulluchu Man, because the banner yielded some of the first graphic samples of this ancient fruit ever discovered.

It was found in level 1 of the burial site of the Lord of Sipán. The Lord was probably a high-ranking shaman or leader, found in an impressive Moche burial ground, near Chiclayo, in Peru. 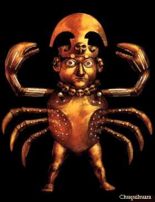 The ulluchu fruit is laden with symbolism, usually appearing in scenes relating to war and the ritual drinking of a prisoner's blood. One theory suggests that the ulluchu, part of the papaya family with anticoagulant properties, is useful in forestalling blood clotting before a prisoner's blood was consumed.