Cronus is not to be confused with Chronos, the personification of time. Also see Cronus (disambiguation) for other uses.

In Greek mythology, Cronus (Ancient Greek Κρόνος—of obscure etymology, perhaps related to "horned" as seen in the word unicorn, which is indicitive of its connection to the levant deity El), also called Cronos or Kronos, was the leader and the youngest of the first generation of Titans, divine descendants of Gaia, the earth, and Uranus, the sky. He overthrew his father, Uranus, and ruled during the mythological Golden Age, until he was overthrown by his own son, Zeus. He was not imprisoned in the depths of the underworld, Tartarus, like most other Titans, but instead fled.

As a result of his association with the bountiful and virtuous Golden Age, Cronus was worshiped as a harvest deity, overseeing crops such as corn and grains, and nature, agriculture, and the progression of time in relation to humans in general. He was usually depicted with a sickle, which he used to harvest crops and which was also the weapon he used to castrate and depose Uranus. In Athens, on the twelfth day of every month (Hekatombaion), a festival called Kronia was held in honor of Cronus to celebrate the harvest. Cronus was also identified in classical antiquity with the Roman deity Saturn.

In Greek mythology and early myths

In ancient Greek myths, Cronus envied the power of his father and the ruler of the universe, Uranus. Uranus drew the enmity of Cronus' mother, Gaia, when he hid the gigantic youngest children of Gaia, the hundred-armed Hecatonchires and one-eyed Cyclopes, in Tartarus, so that they would not see the light. Gaia created a great sickle and gathered together Cronus and his brothers to ask them to kill Uranus. Only Cronus was willing to do the deed, so Gaia gave him the sickle and placed him in ambush. When Uranus met with Gaia Cronus attacked Uranus with the sickle, castrating him and casting the severed member into the sea. From the blood (or, by a few accounts, semen) that spilled out from Uranus and fell upon the earth, the Gigantes, Erinyes, and Meliae were produced. From the member that was cast into the sea, Aphrodite later emerged. For this, Uranus threatened vengeance and called his sons titenes ("straining ones") for overstepping their boundaries and daring to commit such an act, and this is the source of the name Titan.

In an alternate version of this myth, a more benevolent Cronus overthrew the wicked serpentine Titan Ophion. In doing so, he released the world from bondage and for a time ruled it justly.

After dispatching Uranus, Cronus re-imprisoned the Hecatonchires, the Gigantes, and the Cyclopes and set the dragon Campe to guard them. He and Rhea took the throne of the world as King and Queen. This period of Cronus' rule was called the Golden Age, as the people of the time had no need for laws or rules; everyone did the right thing, and immorality was absent. 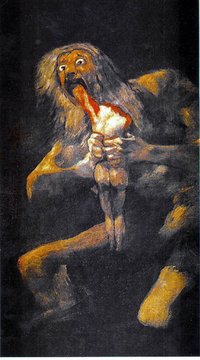 Cronus learned from Gaia and Uranus that he was destined to be overcome by his own son, just as he had overthrown his father. As a result, although he sired the gods Demeter, Hera, Hades, Hestia, and Poseidon by Rhea, he swallowed them all as soon as they were born to preempt the prophecy. Finally, when a sixth child, Zeus, was about to be born, Rhea sought Gaia to devise a plan to save Zeus and to eventually get retribution on Cronus for his acts against his father and children. Rhea secretly gave birth to Zeus in Crete, and handed Cronus a stone wrapped in swaddling clothes, also known as the Omphalos Stone, which he promptly swallowed, thinking that it is his son.

Rhea kept Zeus hidden in a cave on Mount Ida, Crete. According to some versions of the story, he was then raised by a goat named Amalthea, while a company of Kouretes, armored male dancers, shouted and clapped their hands to make enough noise to mask the baby's cries from Cronus. Other versions of the myth have Zeus raised by the nymph Adamanthea, who hid Zeus by dangling him by a rope from a tree so that he was suspended between the earth, the sea, and the sky, all of which were ruled by his father, Cronus. Still other versions of the tale say that Zeus was raised by his grandmother, Gaia.

Once he had grown up, Zeus used a potion given to him by Gaia to force Cronus to vomit up the contents of his stomach in reverse order: first the stone, which was set down at Pytho under the glens of Mount Parnassus to be a sign to mortal men, then his two brothers and three sisters. In other versions of the tale, Metis gave Cronus an emetic to force him to disgorge the children, or Zeus cut Cronus' stomach open. After freeing his siblings, Zeus released the Gigantes, the Hecatonchires, and the Cyclopes, who forged for him his thunderbolts. In a vast war called the Titanomachy, Zeus and his brothers and sisters, with the help of the Gigantes, Hecatonchires, and Cyclopes, overthrew Cronus and the other Titans. Afterwards, many of the Titans were confined in Tartarus. Some Titans were not banished to Tartarus. Atlas, Cronus, Epimetheus, Metis, Menoetius, Oceanus and Prometheus are examples of Titans who were not imprisoned in Tartarus following the Titanomachy. Ironically, Zeus also imprisoned the Hecatonchires and the Cyclopes there as well, just as his father and grandfather had; as a result, Gaia sired the monster Typhon to claim revenge, though Zeus was victorious.

Other children Cronus is reputed to have had include Chiron, by Philyra, and Eris, by Nyx.

An earlier version of Cronus, from before worship of Zeus became popular, is considered to be connected to the Semitic deity Ba`al Hammon. The baby-eating myth of Cronos is considered to derive from such early religions, as Ba`al Hammon was sometimes worshiped by Moloch, child sacrifice by burning within a statue of Ba`al Hammon.

He is sometimes said to be the God of time, which is true he does have power over time but he is not a god, he is more than that, a Titan, most people call it and as it said previously before this. If you do refer to him as "The God of Time" correct yourself by saying, "The Lord of Time" otherwise your greek knowledge will be slightly altered than the truth. Cronus is spelled in many forms such as, Kronos, Kronus, Cronos, Chronos, and more.

In Roman mythology and later culture

While the Greeks considered Cronus a force of chaos along with disorder, believing that the Olympian gods had brought an era of peace and order by seizing power from the crude and malicious Titans, the Romans had a more positive view of the deity. Although the Roman deity Saturn was conflated heavily with Cronus, the Romans favored Saturn much more than the Greeks did Cronus. While Cronus was considered a cruel and tempestuous deity to the Greeks, his nature under Roman influence became more innocuous, with his association with the Golden Age eventually causing him to become the god of "human time", i.e., calendars, seasons, and harvests—not to be confused with Chronos, the unrelated embodiment of time in general. While the Greeks largely neglected Cronus, considering him a mere intermediary stage between Uranus and Zeus, he was a larger aspect of Roman mythology and religion; Saturnalia was a festival dedicated in his honor, and at least one temple to Saturn existed in the early Roman Kingdom.

It is important to note that the due to the numerous cities in ancient and classic times which would exist in isolation, numerous myths were developed and adopted to the local region. As technology allowed cultures of common descention to rejoin the peoples made accommadations to create a unified understanding of the universe. It should also be noted that this is not restrained to greeco-roman culture. Historical documents reveal this to be a common event affecting most religions.

As a result of Cronus' importance to the Romans, his Roman variant, Saturn, has had a large influence on Western culture. In accordance with the Near Eastern tradition, the seventh day of the Judaeo-Christian week was also called in Latin Dies Saturni ("Day of Saturn"), which in turn degraded to the English Saturday. In astronomy, the planet Saturn is called so because of Roman influence. It was considered the seventh and outermost of the seven heavenly objects that are visible with the naked eye.

In the real-time strategy computer game Age of Mythology, Cronus—who is called Kronos within the game—is equivocated with Chronos, the personification of time in Greek mythology. While Cronus was often seen as a god of agriculture to the Greeks, Kronos in the game is the Titan of Time. He is also seen as more of a demonic figure than in traditional Greek mythology. He plays a villain role.

In the long running series Stargate SG1, Cronus is a Goa'uld to whom Teal'c's father served as first prime. After failing to succeed in a no-win scenario, Cronus killed him, resulting in a young Teal'c joining the ranks of Apophis, now resolved to take revenge upon him.

The death metal band Kronos refers to Cronus in their name.

In the action adventure video game for PS2, God of War, Cronus—who like above is also called Kronos—is the last living titan who was made to carry the mountain which held The Temple of Pandora on his back. It is said that Kronos died after one thousand years of wandering the desert sands of Greece with the mountain chained to him.

In the televison show Class of the Titans, Cronus has escaped from his prison and is threatening to take over the world again.

In the television show Charmed Cronus was one of the two Titans who tried to decimate the Elders and takeover the world until vanquished by the Charmed Ones.

In the black metal band Venom, the surname of one of the members is Cronos.