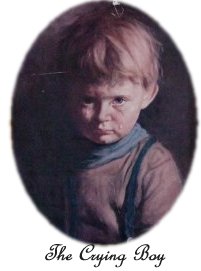 The Crying Boy is a mass-produced print of a painting by Spanish painter Bruno Amadio (also known as Giovanni Bragolin) that is allegedly haunted, causing spontaneous fires in the houses it is displayed.

On September 4, 1985, the British tabloid newspaper The Sun reported that a firefighter from Yorkshire was claiming that undamaged copies of the painting were frequently found amidst the ruins of burned houses. He stated that no firefighter would allow a copy of the painting into his own house. Over the next few months, The Sun and other tabloids ran several articles on house fires suffered by people who had owned the painting. One person that called the “Sun” was Dora Mann of Mitcham and she has been quoted as saying "Only six months after I had bought the picture, my house was completely gutted by fire. All my paintings were destroyed, except the one of the crying boy."

By the end of November, belief in the painting's curse was widespread enough that The Sun was organising mass bonfires of the paintings, sent in by readers. Peter Hall, the fire fighter who originally informed the Sun about these incidents tried to calm down the situation and explained that paintings did occasionally survive a fire. He claimed the newspaper had intentionally omitted his statement at the time he gave his first interview.

One woman said there would be no trouble if one kept the picture next to a painting of a Crying Girl. A male stripper called Big Doofer, whose real name was Adrian Martin, claimed the curse struck him when he suffered facial burns during his fire eating act. He blamed it on the painting because he said he had made the mistake of making fun of his wife’s Crying Boy not too long before appearing onstage.

Some people claimed that the Crying Boy was not evil at all. Actually the painting could bring luck to those who deserved it. For example, one man said that after rescuing the painting from destruction he suddenly began winning money on gambling.

Even if the Crying Boy was considered to bring good luck to some, most people blamed the painting for various health problems, and misfortune. It is unclear how many people are still in possession of a Crying Boy painting and what trouble it causes.

To lift the curse it is said you must give the painting to another or reunite the boy and the girl and hang them together.

There are numerous theories around The Curse of The Crying Boy. Psychics claimed the boy’s spirit was trapped in the painting. Some said the painter had mistreated the boy who was an orphan. Others said the boy set the fires because his parents had died in a fire and he was either acting out the trauma or had been responsible for the fire that left him orphaned to begin with.