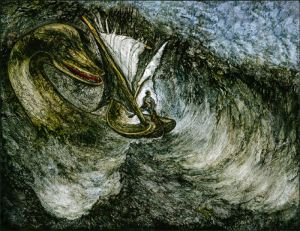 Cryptozoology is the study of animals that are presumed to exist, but for which conclusive proof is missing; the term also includes the study of animals generally considered extinct, but which are still occasionally reported. Those who study or search for such animals are called cryptozoologists, while the hypothetical creatures involved are referred to by some as "cryptids", a term coined by John Wall in 1983.

Invention of the term cryptozoology (adding the Greek prefix kryptós, or "hidden" to zoology to mean "the study of hidden animals") is often attributed to zoologist Bernard Heuvelmans. However, Heuvelmans himself (in his book In the Wake of Sea Serpents) attributes coinage of the term to the late Scottish explorer and adventurer Ivan T. Sanderson. Heuvelmans' 1955 book, On The Track of Unknown Animals traces the scholarly origins of the discipline to Anthonid Cornelis Oudemans and his 1892 study, The Great Sea Serpent. Loren Coleman, the modern popularizer of cryptozoology, has chronicled the history and personalities of the science in his books.

Another notable book was Willy Ley's Exotic Zoology (1959). Ley was best known for his books on rocketry and related topics, but he also wrote a number of books about animals. Exotic Zoology (which combined some of Ley's older writings with new ones) is of some interest to cryptozoology, as he discusses the Yeti and sea serpents, as well as reports of relict dinosaurs. The book's first section ("Myth?") entertains the possibility that some legendary creatures (like the sirrush, the unicorn or the cyclops) might be based on actual animals (or misinterpretation of animals and/or their remains).

Heuvelmans argued that cryptozoology should be undertaken with scientific rigor, but also with an open-minded, interdisciplinary approach. He also stressed that attention should be given to local and folkloric sources regarding such creatures. While often layered in unlikely and fantastic elements, folktales may indeed contain grains of truth and important information regarding these animals.

Some cryptozoologists align themselves with a more scientifically rigorous field like zoology, while others tend toward an anthropological slant or even a Fortean perspective. Cryptozoology is often considered a pseudoscience by mainstream zoologists and biologists.

Scientists have demonstrated that some creatures of mythology, legend or local folklore were rooted in real animals or phenomena. Thus, cryptozoologists hold that people should be open to the possibility that many more such animals exist. In the early days of western exploration of the world, many native tales of unknown animals were initially dismissed as mythology or superstition by western scientists, but were later proven to have a real basis in biological fact.

In the New York Times, William J. Broad writes, "Monster lovers take heart. Scientists argue that so much of the planet remains unexplored that new surprises are sure to show up; if not legendary beasts like the Loch Ness monster or the dinosaur-like reptile "Champ" said to inhabit Lake Champlain, then animals that in their own way may be even stranger."[1] Cryptozoologists point out that natives often know a great deal more about their immediate environment (and the animals that inhabit it) than western investigators, and therefore suggest that, even today, thus far unproven tales and traditions regarding unknown undescribed animals in native folklore should not be summarily dismissed in the same way.

There are several animals cited as examples for continuing cryptozoological efforts (none of which were actually discovered by cryptozoologists):

While many cryptozoologists strive for legitimacy and some are respected scientists in other fields, and though discoveries of previously unknown animals are often subject to great attention, cryptozoology per se has never been fully embraced by the scientific community. A cryptozoologist may propose that an interest in reports of animals does not entail belief, but a detractor might counter that accepting unsubstantiated sightings without skepticism is itself a belief. As in other fields, cryptozoologists tend to be responsible for disproving their own objects of study. For example, some cryptozoologists have collected statistical data and studied witness accounts that challenge the validity of many Bigfoot sightings.

It is the commitment to spectacular animals (mostly vertebrates) that makes cryptozoology's critics suspicious of sensationalism. A source of suspicion could be that cryptids are usually creatures that should have been the least likely to remain undetected and to leave no traces in the fossil record, such as dinosaurs and hominids. More probable cryptids like smaller vertebrates and invertebrates are usually not reported as cryptids and seem to be of little interest to cryptozoologists.

Many mainstream experts are likely put off by the more sensationalistic fringe elements in cryptozoology, and the occasional overlap with alleged paranormal phenomena. Another reason for the lukewarm reaction from mainstream science may be a lack of specialization. Unlike mainstream animal experts (who typically focus vary narrowly on a specific species for their study), many cryptozoologists study or research a broad range of alleged creatures from many different families.

Most criticism—and sometimes ridicule—from the scientific mainstream is, however, directed at the proponents for the existence of the more "famous" cryptids (like Bigfoot, Yeti or the Loch Ness Monster), whose existence is generally regarded as highly unlikely. Ben S. Roesch calls these alleged creatures "mega-monsters", and furthermore notes that "many lesser known mystery creatures" are alleged to exist as well, and that "some of these have more evidence going for them than the monster super-stars."[3]

The larger cryptids, in fact, would not only have to often evade close contact (accidental or otherwise) with humans to remain undiscovered, they would also have to do so in great numbers. Such creatures could not survive unless there were gene pool]] composed of many—maybe hundreds—of the creatures. Many lake monsters are proposed to be prehistoric reptiles that would live undetected in lakes despite the lakes being too cold for any known aquatic reptiles and with too little space and food to sustain a viable population of large animals. Aquatic animals with lungs like mammals and plesiosaurs would also need to surface for air, making their ability to remain undetected in the view of skeptics like for example Bengt Sjögren (1980) very unlikely. There is also no evidence for any surviving prehistoric creatures in the fossil record. No unambiguous physical evidence (like a dead specimen) has ever been presented.

Supposedly credible eye-witness reports exist of Bigfoot-like creatures in densely populated areas along the American east-coast, sightings of creatures such as Mothman, Spring-heeled Jack, reptilian humanoids and of ghosts, whose eyewitnesses might be just as honest and credible. A cryptozoologist must also address the sudden appearance and disappearance of sightings of the proposed animals, for example the Loch Ness monster was not commonly reported until the 1930s. In the 19th century, a Swedish folklorist collected trustworthy reports of sightings of lindworms in Småland, Sweden, but after a reward for a real animal was proclaimed, not only did any fail to find a lindworm, but the reports of existing such creatures rapidly decreased and disappeared entirely (Sjögren, 1980). The portrayal of the Loch Ness Monster's form appears to have changed radically between early sightings and the discovery of the plesiosaur.