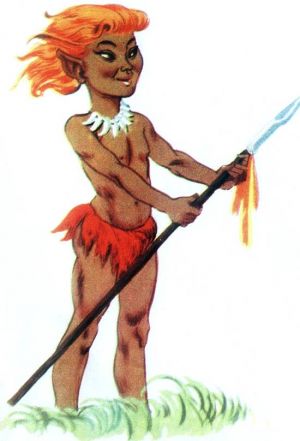 The Curupira is a forest spirit in Tupi mythology, an indigeneous ethic group leaving in the Brazilian rainforests.

This name comes from tupi: curu, boy, and pira: body

The Curupira takes the form of a wild human boy with flaming red hair and green teeth. Its most startling characteristic, however, is that its feet are turned to face backwards.

Its raison d'être is to protect the forest from the destructive habits of man. It happily tolerates those who hunt for food but is infuriated by those who hunt for the pleasure of it and will lay traps and confuse them so that they become eternally lost in the forest. Its backward feet, for example, have the effect of confusing hunters who may try to follow its tracks.

The Curupira blends many features of West-African and European fairies.

The TV series BeastMaster features a female version of Curupira played by Emilie de Ravin. Aside from gender and hair color, the representation is faithful to the description above, including the backward feet and the fierce protectiveness toward the forest and forest creatures.