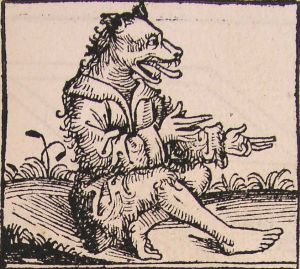 A cynocephalus. From the Nuremberg Chronicle (1493).

The Cynocephali are dog-headed bipedal creatures in the mythologies of Europe, India and China.

The word is taken from Latin cynocephalus dog-head, which derives from Greek: κῠνοκέφᾰλοι. In Anglo-Saxon England, the Old English word wulfes heafod (wolf’s head) was a technical term for an outlaw, who could be killed as if he were a wolf.

The Cynocephali were described as human hybrids with wolf or dog's head. Some pretend that they are shapeshifters who could change from human to dog, but who always retained some animal features when they became human again (like the kitsune).

The legends in the Chinese culture originally said that the Cynocephali resided somewhere in the wild lands west of Tibet and north of Persia (modern-day Iran).

According to Marco Polo, they were found on the island of Andaman, about 1000 miles east of Ceylon. (also called Taprobana) He says: "You may take it for a fact that all the men of the island have heads like dogs, and teeth and eyes like dogs; for I assure you that the whole aspect of their faces is that of big mastiffs. They are a very cruel race: whenever they can get a hold of a man who is not one of their kind, they devour him." (Latham, 1958).

Sir John Mandeville placed them on an unknown island called Macumeran. The king had an enormous ruby that he wore around his neck, and they worshipped the ox.

Isidore of Seville and most classical writers give them India as homeland.

Cynocephaly was familiar to the Ancient Greeks from representations of the Egyptian god Hapi, the son of Horus, and Anubis, the Egyptian god of the dead, always shown with the head of a jackal.

Reports of dog-headed races can also be traced back to Greek antiquity. In the fifth century BC, the Greek physician Ctesias wrote a detailed report on the existence of cynocephali in India.

Similarly, the Greek traveller Megasthenes claimed to know about dog-headed people in India who lived in the mountains, communicated through barking, wore the skins of wild animals and lived by hunting.

Cynocephali also figure in Christian world-views. A legend that placed St. Andrew and St. Bartholomew among the Parthians presented the case of "Abominable", the citizen of the "city of cannibals... whose face was like unto that of a dog." After receiving baptism, however, he was released from his doggish aspect.

Saint Christopher In the Eastern Orthodox Church, certain icons covertly identify Saint Christopher with the head of a dog. The background to the dog-headed Christopher is laid in the reign of the Emperor Diocletian, when a man named Reprebus, Rebrebus or Reprobus (the "reprobate" or "scoundrel") was captured in combat against tribes dwelling to the west of Egypt in Cyrenaica. To the unit of soldiers, according to the hagiographic narrative, was assigned the name numerus Marmaritarum or Unit of the Marmaritae, which suggests an otherwise-unidentified Marmaritae"(perhaps the same as the Marmaricae Berber tribe of Cyrenaica). He was reported to be of enormous size, with the head of a dog instead of a man, apparently a characteristic of the Marmaritae.

The German bishop and poet Walter of Speyer portrayed St. Christopher as a giant of a cynocephalic species in the land of the Chananeans (the "canines" of Canaan in the New Testament) who ate human flesh and barked. Eventually, Christopher met the Christ child, regretted his former behavior, and received baptism. He, too, was rewarded with a human appearance, whereupon he devoted his life to Christian service and became an athlete of God, one of the soldier-saints.

The "cynocephali" offered such an evocative image of the magic and brutality deemed characteristic of bizarre people of distant places, that it kept returning in medieval literature. A number of late antique and medieval scholars reported on the Cynocephalae, sometimes with the aplomb of anthropologists like St. Augustine and Isidore of Seville.

Paul the Deacon mentions cynocephali in his Historia gentis Langobardorum: "They pretend that they have in their camps Cynocephali, that is, men with dogs' heads. They spread the rumor among the enemy that these men wage war obstinately, drink human blood and quaff their own gore if they cannot reach the foe."

The ninth-century Frankish theologian Ratramnus wrote a letter, the Epistola de Cynocephalis, on whether the Cynocephali should be considered human. Quoting St. Jerome, Thomas of Cantimpré corroborated the existence of Cynocephali in his Liber de Monstruosis Hominibus Orientis, xiv, ("Book of Monstrous men of the Orient").

The thirteenth-century encyclopedist Vincent of Beauvais acquainted his patron Saint Louis IX of France with "an animal with the head of the dog but with all other members of human appearance… Though he behaves like a man… and, when peaceful, he is tender like a man, when furious, he becomes cruel and retaliates on humankind" (Speculum naturale, 31:126).

The so-called Leges Edwardi Confessori, written around 1140, however, offered a somewhat literal interpretation: “[6.2a] For from the day of his outlawry he bears a wolf’s head, which is called wluesheued by the English. And this sentence is the same for all outlaws.”

Cynocephali appear in the Old Welsh poem Pa Gur as cinbin (dogheads). Here they are enemies of King Arthur's retinue; Arthur's men fight them in the mountains of Eidyn (Edinburgh), and hundreds of them fall at the hand of Arthur's warrior Bedwyr (later known as Bedivere). The next lines of the poem also mention a fight with a character named Garwlwyd (Rough-Gray); a Gwrgi Garwlwyd (Man-Dog Rough-Gray) appears in one of the Welsh Triads, where he is described in such a way that scholars have discussed him as a werewolf.

Medieval travellers Giovanni da Pian del Carpine and Marco Polo both mention cynocephali. Giovanni writes of the armies of Ogedei Khan who encounter a race of dogheads who live north of the Dalai-Nor (Northern Ocean), or Lake Baikal. Polo's Travels mentions the dog-headed barbarians on the island of Angamanain, or the Andaman Islands. For Polo, although these people grow spices, they are nonetheless cruel and "are all just like big mastiff dogs".

According to Henri Cordier, the source of all the fables of the dog-headed barbarians, whether European, Arabic, or Chinese, can be found in the Alexander Romance.

Additionally, in the Chinese record History of the Liang Dynasty (Liang Shu), the Buddhist missionary Hui-Sheng describes an island of dog-headed men to the east of Fusang, a nation he visited variously identified as Japan or the Americas. The History of Northern Dynasties of Li Yanshou, a T'Ang Dynasty historian, also mentions the 'dog kingdom'.

"On these [the Indian] mountains there live men with the head of a dog, whose clothing is the skin of wild beasts. They speak no language, but bark like dogs, and in this manner make themselves understood by each other. Their teeth are larger than those of dogs, their nails like those of these animals, but longer and rounder. They inhabit the mountains as far as the river Indos. Their complexion is swarthy. They are extremely just, like the rest of the Indians with whom they associate. They understand the Indian language but are unable to converse, only barking or making signs with their hands and fingers by way of reply, like the deaf and dumb. They are called by the Indians Kalystrii, in Greek Kynocephaloi (dog-headed). They live on raw meat and number about 120,000 . . . The Kynokephaloi living on the mountains do not practise any trade but live by hunting. When they have killed an animal they roast it in the sun. They also rear numbers of sheep, goats, and asses, drinking the milk of the sheep and whey made from it. They eat the fruit of the Siptakhora, whence amber is procured, since it is sweet. They also dry it and keep it in baskets, as the Greeks keep their dried grapes. They make rafts which they load with this fruit together with well-cleaned purple flowers and 260 talents of amber, with the same quantity of the purple dye, and 1000 additional talents of amber, which they send annually to the king of India. They exchange the rest for bread, flour, and cotton stuffs with the Indians, from whom they also buy swords for hunting wild beasts, bows, and arrows, being very skilful in drawing the bow and hurling the spear. They cannot be defeated in war, since they inhabit lofty and inaccessible mountains. Every five years the king sends them a present of 300,000 bows, as many spears, 120,000 shields, and 50,000 swords. 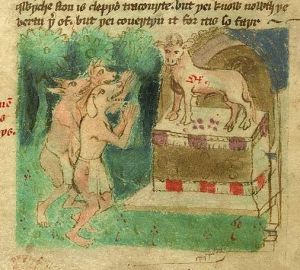 They do not live in houses, but in caves. They set out for the chase with bows and spears, and as they are very swift of foot, they pursue and soon overtake their quarry. The women have a bath once a month, the men do not have a bath at all, but only wash their hands. They anoint themselves three times a month with oil made from milk and wipe themselves with skins. The clothes of men and women alike are not skins with the hair on, but skins tanned and very fine. The richest wear linen clothes, but they are few in number. They have no beds, but sleep on leaves or grass. He who possesses the greatest number of sheep is considered the richest, and so in regard to their other possessions. All, both men and women, have tails above their hips, like dogs, but longer and more hairy. They are just, and live longer than any other men, 170, sometimes 200 years."