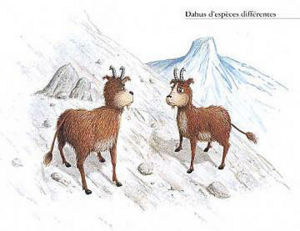 The dahu is an imaginary creature in the folklore of the Alps mountains in France, Switzerland and the north of Italy.

Regional variations on its name include dahut or dairi in Jura, darou in Vosges or darhut in Burgundy; also called a tamarou in Aubrac and Aveyron). The dahu cub is called a dahuot.

The hunt for the dahu is a popular prank with tourists coming to ski.

Another method is to have pepper ground onto a large stone; when the dahu, while grazing, comes and sniffs the pepper, it would sneeze and knock itself out against the stone.