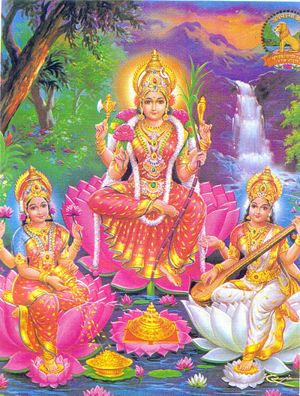 In Hindu and Buddhist mythology, Veda is a term that means spirit, demi-god, celestial being, angel, deity or any supernatural being of high excellence. In Hinduism, the devas are opposed to the demonic asuras.

The word is from Proto-Indo-European *deiwos, originally an adjective meaning "celestial" or "shining", a Proto-Indo-European (not synchronic Sanskrit)vrddhi derivative from a root *diw "to shine", especially of the daylit sky. The feminine is Devi "goddess" (PIE *deiwih2).

Today, Hindus also refer to Devas as Devata. The Romani word for God, del or devel, is directly descended from devata (to which the word "devil" is wholly unrelated). Also cognate to deva are the Lithuanian Dievas (Latvian Dievs, Prussian Deiwas), Germanic Tiwaz (seen in English "Tuesday") and Latin deus "god" and divus "divine", from which the English words "divine", "deity", and French "dieu",and Italian "dio" are derived.

The Vedas, the earliest comprehensive literature of the Indo-European people, contain mantras for pleasing the devas to obtain blessings. The Rig Veda, the earliest of the four, enumerates 33 devas, which in later Hinduism became exaggerated to 330 million, likely because the same Sanskrit word means "ten million" and "class, group", i.e. "33 types of divine manifestations".

Some devas represent the forces of nature and some represent moral values. The main deva addressed in the Rig Veda is Indra. Agni (fire) and Soma represent modes of fire-sacrifice, called yagna, but personified are also seen as devas. All gods taken together are worshipped as the Vishvedevas. Varuna, identified by some to have become the Supreme God of Zoroastrianism Ahura Mazda, has the dual title of deva and asura. There are also other devas like Savitr, Vishnu, Rudra (later given the exclusive epithet of Shiva), Prajapati(later identified with Brahma), and devis (goddesses) like Ushas, Prithvi and Sarasvati.

Nature devas are responsible for 'things' such as fire, air, rain and trees - most of them assumed a minor role in the later religion. Certain other deities rose into prominence. These higher devas control much more intricate tasks governing the functioning of the cosmos and the evolution of creation. Mahadevas, such as Lord Ganesha, have such tremenduous tasks under their diligence that they are sometimes called themselves gods under the Supreme One God. The Hindu trinity is composed of Brahma, Vishnu and Shiva. Vayu or the Lord of the wind is an example of an important deva. Also, Death is personified as the deva Yama.

Devas, in Hinduism, are celestial beings that control forces of nature such as fire, air, wind, etc. They are not to be confused with the One and the Supreme God or His personal form, Saguna Brahman which can be visualized as Vishnu or Shiva. A famous verse from the Katha Upanishad states: “From fear (here, power) of Him the wind blows; from fear of Him the sun rises; from fear of Him Agni and Indra and Death, the fifth, run." In actuality, Brahman is the only Ultimate Reality, and all devas are simply mundane manifestations of Him.

The Vaishnavites (who often translate deva as "demigod") cite various verses that speak of the Devas' subordinate status. For example, the Rig Veda (1.22.20) states: "All the suras (i.e., the devas) look always toward the feet of Lord Vishnu." Similarly, in the Vishnu sahasranama the concluding verses state: "The Rishis (great sages), the ancestors, the Devas, the great elements, in fact all things moving and unmoving constituting this universe, have originated from Narayana," (i.e., Vishnu). Thus the Devas are stated to be subordinate to Vishnu, or God.

In the Bhagavad Gita, Krishna himself states that worshipers of deities other than the Supreme Lord, Vishnu, are incorrect (Gita 9.23) as such worship leads only to temporal benefits, rather than to the Lord Himself (Gita 7.23). Krishna also says: "Whatever deity or form a devotee worships, I make his faith steady. However, their wishes are granted only by Me." (Gita: 7:21-22) Elsewhere in the Gita Lord Krishna states: "O Arjuna, even those devotees who worship other lesser deities (e.g., Devas, for example) with faith, they also worship Me, but in an improper way because I am the Supreme Being. I alone am the enjoyer of all sacrificial services (Seva, Yajna) and Lord of the universe." (Gita: 9:23)

The pantheon in the Srauta tradition consists of various gods and goddesses.

The main devas are (vide 6th anuvaka of Rudram Chamakam):

Mitra and Varuna are asuras, not devas.

The main devis are:

The term deva does not refer to a natural class of beings, but is defined anthropocentrically to include all those beings more powerful or more blissful than humans. It includes some very different types of being; these types can be ranked hierarchically. The lowest classes of these beings are closer in their nature to human beings than to the higher classes of deva.

The devas fall into three classes depending upon which of the three dhatus, or "realms" of the universe they are born in.

They are also more interested in and involved with the world below than any of the higher devas, and sometimes intervene with advice and counsel. Each of these groups of deva-worlds contains different grades of devas, but all of those within a single group are able to interact and communicate with each other. On the other hand, the lower groups have no direct knowledge of even the existence of the higher types of deva at all. For this reason, some of the Brahmas have become proud, imagining themselves as the creators of their own worlds and of all the worlds below them (because they came into existence before those worlds began to exist).

The higher devas of the Kamadhatu live in four heavens that float in the air, leaving them free from contact with the strife of the lower world. They are:

The lower devas of the Kamadhatu live on different parts of the mountain at the center of the world, Sumeru. They are even more passionate than the higher devas, and do not simply enjoy themselves but also engage in strife and fighting. They are:

Sometimes included among the devas, and sometimes placed in a different category, are the Asuras, the opponents of the preceding two groups of devas, whose nature is to be continually engaged in war.

Powers of the devas

From a human perspective, devas share the characteristic of being invisible to the physical human eye. The presence of a deva can be detected by those humans who have opened the Divine eye (Pali: dibbacakkhu), an extrasensory power by which one can see beings from other planes. Their voices can also be heard by those who have cultivated a similar power of the ear.

Most devas are also capable of constructing illusory forms by which they can manifest themselves to the beings of lower worlds; higher and lower devas even have to do this between each other.

Devas do not require the same kind of sustenance as humans do, although the lower kinds do eat and drink. The higher sorts of deva shine with their own intrinsic luminosity.

Devas are also capable of moving great distances speedily and of flying through the air, although the lower devas sometimes accomplish this through magical aids such as a flying chariot.

Humans are said to have originally had many of the powers of the devas: not requiring food, the ability to fly through the air, and shining by their own light. Over time they began to eat solid foods, their bodies became coarser and their powers disappeared.

Although the word deva is generally translated "god" (or, very occasionally, "angel") in English, Buddhist devas differ from the "gods", "God", or "angels" of western religions past and present in many important ways.

The world of Buddhist meditation and practice includes several types of being that are often called "gods", but are distinct from the devas.