In Slavic lore, the male son born by a widow and her dead vampire husband is called dhampir' (also dhamphir or dhampyr). 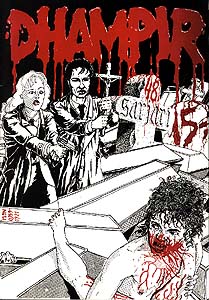 The word dhampir is associated with folklore of the Roma, gypsies of the Balkans. In other areas it is believed that the offspring of a vampire will be slippery like jelly, and cannot live (Vukanovic 1957-1959, pt. 3, p. 112).

Throughout the area the term dhampir refers to the offspring of a vampire and a human; terms for such a being that are used in various subregions include vampijerovic, vampiric (little vampire), and lampijerovic; in some regions the child is named "Vampir" if a boy and "Vampiresa" if a girl, or Dhampir if a boy and Dhampiresa if a girl.

Among all Balkan peoples it is believed that the child of a vampire can see and destroy vampires. Among some groups, the ability to see vampires is considered exclusive to dhampirs. The powers of a dhampir may be inherited by the dhampir's offspring and cannot be taught.. Such a living male offspring would sometimes become a professional vampire hunter and destroyer.

Various means of killing or driving away vampires are recognized among peoples of the region, but the dhampir is seen as the chief agent for dealing with vampires. Methods by which a dhampir kills a vampire include shooting the vampire with a bullet, transfixing it with a hawthorn stake, and performing a ceremony that involves touching "crowns" of lead to the vampire's grave. If the dhampir cannot destroy a vampire, he may command it to leave the area.

A dhampir is always paid well for his services. The amount of money varies, but there is never dickering over the price. Standard pay for a dhampir may also include a meal or a suit of clothing. Sometimes a dhampir is paid in cattle. As late as 1959, professional dhampirs were still in business in Kosova.

Quite often charlatans traveling the regions around the Carpathian Mountains and elsewhere in Eastern Europe would claim to be dhampirs. Operating by the original myth of vampyr (old spelling, both singular and plural) as spirit creatures, they were the only ones who could see the spirit and would put on elaborate shows for villages, often wrestling with an invisible foe until it was then trapped in a brass vessel. Usually a dhampir would wait until there was a death in a village.

As rural people tended to be more superstitious, unnatural explanations would be believed for unusual events, real or imagined (such as believing to have seen the dead walking the village at night). The belief was that the vampyr would take over the recently dead corpse, for as long as it would last, to invade villages. They fed off life force directly, not by blood, sometimes killing victims in close proximity so life leaving the body could be consumed more quickly.) Once fear, grief and superstition took hold in a village following a recent death, the dhampir would "come to the rescue

He is also a skilled vampire hunter.

Saga of the Noble Dead

In the latter case, the character begins the story with no knowledge of her ancestry and earns her living as a fake vampire-hunter as above; her discovery of the true state of affairs comes as a considerable shock.

Demon in My View

After her mother became human again, Jessica was born as a child with a direct link to Siete, the father of all vampires.

The character Nothing in the novel Lost Souls by Poppy Z. Brite is a dhampir.

He became a popular character through the Blade, movie made in 1998 and its sequels, starring Wesley Snipes as the main hybrid hero. However, instead of being the offspring of a vampire and human, Blade's mother was bitten by a vampire while she was pregnant with her baby, Eric. It should be noted that Blade is only recently depicted as a Dhampir, as the original incarnation had the same origin, but did not have Vampiric powers. Instead, he could smell things of a supernatural nature, most usually vampires. However, in Spider-Man: The Animated Series, Blade is indeed a Dhampir, a son of a Vampire and a woman, and the movie character is based, in part, on this version.

In 1999, White Wolf introduced an end-time scenario which affected all of their game lines; included in this was the "Vampire: The Masquerade" series. In the book Time of Thin Blood, weak-blooded Western Vampires— whose blood was sufficiently distant from that of the original Vampire, Caine—lacked many standard vampiric powers and were often incapable of creating further vampires, but became capable of conceiving and birthing dhampirs.

While a Dhampir is not technically a Ghoul, a human given supernatural powers by drinking vampire blood, they have biological similarities to Revenants (ghouls that are literally bred to serve vampires). The most important differences between Dhampirs and Revenants are cultural. Revenants grow up in a freakish, monstrous subculture of Vampires and Ghouls. Only quite unusual circumstances could lead to a Revenant growing up among normal, contemporary humans. A Dhampir probably spent most of their time among normal humans. They might not even know about their supernatural heritage. Learning about the secret World of Darkness may come as a bit of a shock.

Castlevania Symphony of the night

The offspring of an unatural union Count Dracula and a human woman(Lisa).Alucard possesses inhuman strength and dark magical powers.His weapon of choice is a sword and he uses a variety of them to serve his needs.He is an adept shapeshifter, commonly using the forms of wolf, bat, and mist to confuse and terrify his opponets.Alucard also relies heavily on ancient relics and magical items to perform elaborate magical attacks.

Part of this article consists of modified text from Wikipedia, and the article is therefore licensed under GFDL.
Retrieved from "https://www.monstropedia.org/index.php?title=Dhampir&oldid=14448"
Categories: