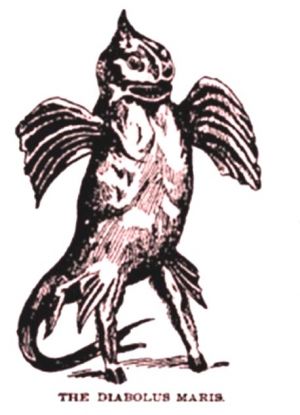 The Diabolus Maris is a hybrid marine monster, that was allegedly captured in 1896, by Capt. George Bier, of the United States Navy.

According to the Iola Register (September 25, 1896), the Diabolus Maris was captured off the coast of Florida (USA), at Malanzas inlet, in 72 feet of water. The monster was caught on a hook and line, and when dragged aboard the boat, it was full of fight. The creature was so vicious that it could not be handled and the crew eventually killed it. The body was displayed for some time but there are no testimonies left except this drawing.

This remarkable relic of the antediluvian monster seemed to be part bird, part fish and part animal.

Capt. Bier described it as follows:

“It has no scales, although it can swim. A portion of its body is :covered with hair and when it wants to fly it inflates two windbags :behind its wings. This Inflation is through its gills, which are :situated on its breast. It stands upright upon its feet, which are :shaped like hoofs. Its face and body are more human like than anything :else and its mouth is like that of a raccoon, garnished with two rows of :teeth. It stood about 20 inches high and strutted like a rooster.”