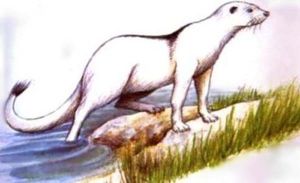 Dobhar-chu resembles both a dog and an otter and has fur with protective properties.

Dobhar-chu comes in various colours, one phenotype is described as white with short fur, and has features quite like an otter and has a black or dark brown "cross-like" mark that runs down its neck and back.