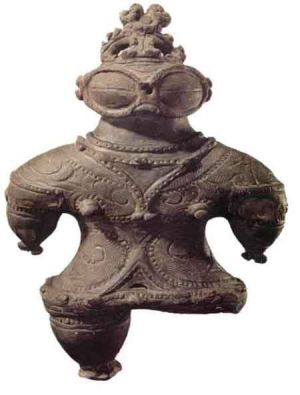 Dogu are and are found in a variety of different shapes which depict figures with upstretched hands, pregnant women close to giving birth, and figures with extremely large faces. Some appear to wear goggles (Shakōkidogū) or have 'heart-shaped' faces. Most have marks on the face, chest and shoulders, which suggest tattooing and probable incision with bamboo. The breasts, small waists, and wide hips of females are representative of goddesses. Many have the large stomachs associated with pregnancy, suggesting that the Jomon considered them Mother Goddesses.

According to the National Museum of Japanese History, the total number found throughout Japan is approximately 15,000. Most of the Dogū have been found in East Japan and it is rare to find one in West Japan. Unbroken figures are rare, and most are missing an arm, leg or other body part. In many cases, the parts have been cut off. One theory is that parts of the figures may have been cut off in fertility rituals.

The purpose of the Dogū remains unclear but, most likely, the Dogū acted as effigies of people, that manifested some kind of sympathetic magic. For example, it may have been believed that illnesses could be transferred into the Dogū, then destroyed, clearing the illness, or any other misfortune.

Strangely, dogu are reminiscent of spacenauts wearing masks and spacesuits. Viatcheslaw Zaitsev was the first to promote this theory published in the soviet magazine Spoutnik in June 1967 followed later by Erich von Däniken.