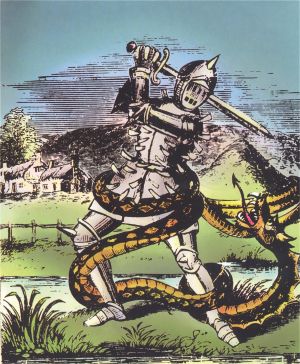 The Dragon of Loschy Hill or Nunnington dragon is a legendary beast from the folklore of Yorkshire, England.

This dragon was known for having a deadly tongue with a poisonous lethal outcome and teeth that were reputed to be equal to the size of pitchfork prongs.

Peter Loschy wore a suit of armour that was studded with sharp blades. When the dragon coiled around him it was cut in pieces by the blades and by Loschy’s sword.

But the Nunnington dragon had the power of regeneration and kept reconnecting its cut parts to become whole again. Then, Peter hacked away at the tongue until it was dead, whilst his faithful hound carried the pieces to a hill about a mile away, this prevented its regeneration. It is said that the hound was so happy to serve his master that after completing the task he licked his master's face. Alas this served as an ill-omen for both of them, with the poison taking hold. Both are said to be buried in Nunnington Church.