The dragon of St. Leonards Forest was to be found in Sussex, near Horsham. 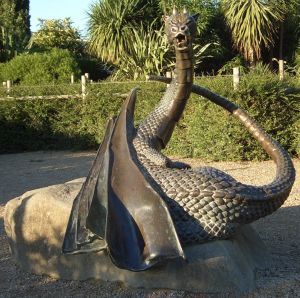 Statue erected to celebrate the millenium in Horsham Park

It is said that St. Leonard, a 6th century French hermit, once lived in St. Leonards forest. During a long battle with a Dragon living there, which he eventually won, St. Leonard was injured. It is said that God made White Lilies spring forth from the ground where the Saints blood fell. Also asking what reward the Saint wanted for freeing the local people from the Dragon, he asked that snakes would be banished from the forest and nightingales, which had disturbed the Saints prayers, would be silent.

Dr. Andrew Borde wrote in the 16th century that the Nightingales didn't sing because they disturbed the devotions of a forest hermit. The is no proof that St. Leonard, a French saint and Martyr, ever visited Sussex, though the legend may have been attributed to him through a hermitage within the forest. Nevertheless, there is recorded a fragment of a traditional rhyme regarding the forest, which states :

"Here the Adders never sting,
Nor the Nightingales sing."

Another version says he asked for the snakes to be made deaf, and this is echoed in another piece of superstition regarding snakes in Sussex, that on their bellies, Adders have written the words :

"If I could hear as well as see,
No mortal man should master me."

Finally, it should be noted that there is a small place called "Dragons Green" just to the South-West of the forest. While this may be a reference to the legend of the Dragons in St. Leonards forest, it may also be a reference to the personal name of Dragon. A family so named, natives of Roffey, lived in nearby Cowfold and gave their name to Dragon's Farm there, a place name which goes back to 1682.