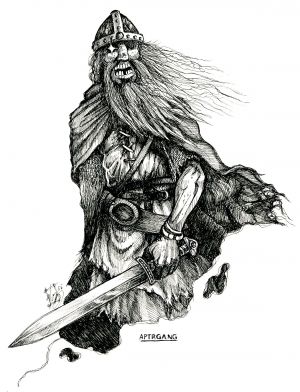 A draug (plural draugar), draugr or draugen (Norwegian meaning the draug) is a corporeal undead from Norse mythology. Draugar were believed to live in the graves of dead Vikings, being the body of the dead.

The original Nordic meaning of the word Draugr (pronounced "droo-GORE") is ghost.

Norwegian folklore records a number of different draug-types. In older literature one will find clear distinctions between Sea-draug and land-draug. The connection between the draug and the sea can be traced back to the author Jonas Lie and the story-teller Regine Nordmann, as well as the drawings of Theodor Kittelsen, who spent some years living in Svolvær. Up north, the tradition of sea-draugar is especially vivid. Arne Garborg, on the other hand, describes land-draugar coming fresh from the graveyards, and the term draug is even used of Vampires, in Norway translated as "Bloodsucker-draugar". In this sense, the draug is an undead. A subtype of the draugr was the haugbui. The notable difference between the two was that the haugbui was unable to leave its grave site and only attacked those that trespassed upon their territory. In more recent folklore, the draug is often identified with the spirits of mariners drowned at sea. 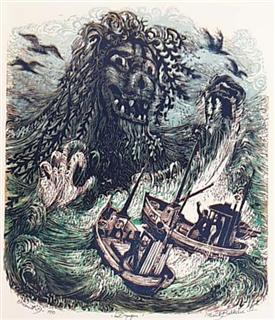 In Scandinavian folklore, the creature is said to possess a distinctly human form said to be either hel-blar ("death black") or, conversely, na-folr ("corpse-pale"). In other tellings, the draug is described as being a headless fisherman, dressed in oilskins. This trait is common in the northernmost part of Norway, where life and culture was based on the fish, more than anywhere else.

Draug sightings in modern times are not so common, but are still reported by reasonable and relatively sane individuals from time to time. Due to this trend, the term “draug” has come to be used in a more general sense in recent years to describe any type of revenant in Nordic folklore.

All draugr possessed superhuman strength, the ability to increase their size at will with some immunity to usual weapons. The draugar slew their victims through various methods including crushing them with their enlarged forms, devouring their flesh, and drinking their blood. Animals feeding near the grave of a draugr were often driven mad by the creature's influence. In some accounts, witnesses portray them as shapeshifters who take on the appearance of seaweed or moss-covered stones on the shoreline. They were also noted for the ability to rise from the grave as wisps of smoke.

The Draugr is a virtually unstoppable monster, and possesses only a handful of weaknesses. According to one legend, one man drove the revenant away using a mixture of herbs and his own semen. This man was eventually burned at the stake as a witch.

The only other weaknesses the Draugr could possibly have is fire and decapitation. Fire is a vulnerability shared by most of the corporeal undead, a sure sign that nature itself rebels against the very existence of the undead. However, decapitation only works after the creature has been wrestled to the ground and defeated. Therefore, decapitation and burning are the only methods of permanently destroying the Draugr.

While this unliving horror cannot be slain in the traditional sense, there is one way to defeat the Draugr. A hero, one who is pure of heart and is in good standing with God, must face the creature with only his bare hands, for only by wrestling this revenant into submission can one hope to defeat this monster. Then, the creature must be decapitated (preferably with the Draugr’s own sword or axe), and burned to ashes. Some people took the extra precaution of driving a wooden stake through the corpse before decapitating and cremating the Draugr (which is why this revenant is sometimes identified with the Vampire).

However, it has been suggested that the Draugr is susceptible to weapons forged of cold iron. Whether this actually works or not is subject to folklore.

Some draugr were able to leave their dwelling place, the burial mound, and visit the living during the night. Such visits were universally horrible events, and often ended in death for one or more of the living, and warranted the exhumation of the draugrs tomb by a hero.

Though the draug usually presages death, there is an amusing account in Nord-Norge of a Nordlending who managed to outwit him:

It was Christmas Eve, and Ola went down to his boathouse to get the keg of brandy he had bought for the holidays. When he got in, he noticed a draug sitting on the keg, staring out to sea. Ola, with great presence of mind and great bravery (it might not be amiss to state that he already had done some drinking), tiptoed up behind the draug and struck him sharply in the small of the back, so that he went flying out through the window, with sparks hissing around him as he hit the water. Ola knew he had no time to lose, so he set off at a great rate, running through the churchyard which lay between his home and the boathouse. As he ran, he cried, "Up, all you Christian souls, and help me!" Then he heard the sound of fighting between the ghosts and the draug, who were battling each other with coffin boards and bunches of seaweed. The next morning, when people came to church, the whole yard was strewn with coffin covers, boat boards, and seaweed. After the fight, which the ghosts won, the draug never came back to that district.