A drop bear (or dropbear) is a fictional Australian marsupial commonly said to be an unusually large, vicious, carnivorous koala that inhabit treetops and attack its prey by dropping onto their heads from above. They are an example of local lore intended to frighten and confuse outsiders, and amuse locals, similar to the jackalope, hoop snake, haggis or snipe hunting. 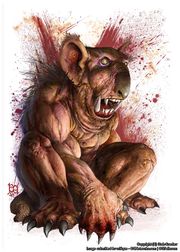 The Drop Bear is described as an arboreal, (tree dwelling) carnivorous mammal of Australia, Phascolarctus Hodgsonii, growing to around 4 feet in height. Believed to have evolved from a similar line to koalas, Drop Bears vary from 3 to 5 feet in hight, but are extremely strong. They are covered in a dense fur, which can range from almost black to the Alpine Drop Bear's snowy white coat. They have broad shoulders and razor sharp claws on all four limbs. They are able to walk for short distances on two legs, but are much faster on *all four, being capable of bursts of speed approaching 60 km/h at full gallop. Their heads are similar to those of koalas, but with enlarged canine teeth, not unlike those of bears or other carnivorous animals. There are no reported photographs of them, and only a select and very lucky few have laid eyes on them and lived to tell the tale.

Drop Bears are not cuddly and friendly, like their cousin the koala. They are vicious, calculating, cold-blooded killers. They generally hide in trees during the day, sleeping on the upper branches out of sight. But in the evening and throughout the night, they hunt by waiting for an unsuspecting victim to walk under the tree - at which point they drop from the branch (hence the colloquial name "dropbear") and begin savaging their prey with claws and teeth in a frenzy of violence. Once the victim has been mauled to death, the dropbear will then eat its fill and move on to a new tree, leaving the corpse lying there like a sack of red rags. Usually dropbears attack smaller prey such as kangaroos and cattle, but they will also attack a full-grown human with no hesitation. If seen, Drop Bears should NOT be approached, as they are easily frightened and likely to attack. Vehicles are known to have been attacked, and being in one is no defence. An adult Drop Bear is able to easily break windows and enter vehicles to extrude would-be meals.

Stories of drop bears are often told to unsuspecting foreign visitors to illustrate Australian morbid humour. It is often suggested that doing ridiculous things like having forks in the hair or Vegemite or toothpaste spread behind the ears will deter the creatures.The only way to get rid of a Drop Bear is to run around in a circle 3 times very quickly. This disorients the Drop Bear and it falls to the ground paralized. Otherwise, if you have a Trip-Snake handy it will sufice as it is the Drop Bears only natural preditor. This story is not just told to guides, scouts and foreign armies, but to all backpacking tourists upon arrival on a tour in Australia.

During WW-II, the Japanese landed on the northern Australia coast. However, very little combat ensued, as the Japanese were ill prepared for an Australian land invasion. While a number of their forces would have been claimed to snake bites, crocodile attacks and tropical diseases, it is generally beleived that the vast majority of the Japanese forces were defeated by Dropbears, before they even saw Australian troops.

A legend is told of two Australian bush-men on their annual cattle muster. On this particular night, after setting up camp, one of the bush-men went down to the river to check the fish traps, while the other stayed by the camp fire strumming a tune on his faithful old guitar. Just as he ended his first tune a terrifying scream rang out. Leaving the safety of the camp fire he ran down through the bush to the river to see his mate lying on the ground shaking, with claw marks all over him. After stopping the bleeding and calming his mate down, the horrible truth was revealed. "It was a drop bear" his mate said, in a voice more like a whimper,"I just reached for the first fish trap and all of a sudden, out of that overhanging branch pounced a drop bear." "I fought as hard as I could but it was just too strong and far too fast."."Did ya get a glimpse of it?", the first bushy said. "A bit of a one, It looked a-lot like a koala, but much much meaner." Leaving all their camping gear behind, they speedily trekked out of the bush, back to civilization to tell their story to the local authorities.

There are several possible origins of the drop bear myth.