In Germanic mythology, a dwarf is a fairy being that dwells in mountains and in the earth, and is associated with wisdom, smithing, mining, and crafting. 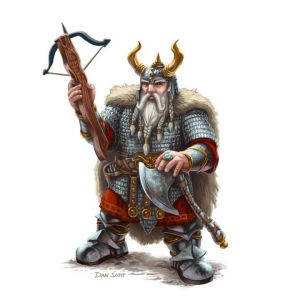 Dwarfs are also sometimes described as short and ugly, although some scholars have questioned whether this is a later development stemming from comical portrayals of the beings.

The Poetic Edda contain over 100 dwarf names, while the Prose Edda gives the four dwarfs Norðri, Suðri, Austri and Vestri a cosmological role–they hold up the sky. In addition, scholars have commented that the Svartálfar, who, like dwarfs, are said in the Prose Edda to dwell in Svartálfaheimr, may be the same beings as dwarfs.

Various theories have been proposed about the origins of the being, including that dwarfs may have originated as nature spirits or beings associated with death, or as a mixture of concepts.

Norse mythology, as recorded in the Poetic Edda (compiled in the 13th century from earlier traditional sources) and the Prose Edda (written by Snorri Sturluson in the 13th century) provide different mythical origins for the beings; the Poetic Edda poem Völuspá details that the dwarfs were the product of the primordial blood of the being Brimir and the bones of Bláinn, whereas the Prose Edda describes dwarfs as beings similar to maggots that festered in the flesh of the primal being Ymir before being gifted with reason by the gods.

Some scholars have proposed that the Poetic Edda poem Völuspá may contain an account of the first human beings, Ask and Embla, as having been the created by dwarfs. A preceding stanza to the account of the creation of Ask and Embla in Völuspá provides a catalog of dwarf names, and stanza 10 has been read as describing the creation of human forms from the earth. This may potentially mean that dwarfs formed humans, and that the three gods gave them life.

After the Christianization of the Germanic peoples, tales of dwarfs continued to be told in the folklore of areas of Europe where Germanic languages were (and are) spoken. Today dwarfs appear commonly in modern popular culture.

At Plesse, a castle in the mountains in Hesse, are various springs, wells, clefts and holes in the rocks, in which, according to popular tradition, the Dwarfs, called the Still-people, dwell. They are silent and beneficent, and willingly serve those who have the good fortune to please them, if injured they vent their anger, not on mankind, but on the cattle, which they plague and torment. This subterranean race has no proper communication with mankind, but pass their lives within the earth, where their apartments and chambers are filled with gold and precious stones. Should occasion require their visit to the surface of the earth, they accomplish the business in the night, and not by day. This Hill-people are of flesh and bone, like mankind, they bear children and die, but in addition to the ordinary faculties of humanity, they have the power of making themselves invisible, and of passing through rocks and wails, with the same facility as through the air. They sometimes appear to men, lead them with them into clifts, and if the strangers prove agreeable to them, present them with valuable gifts.