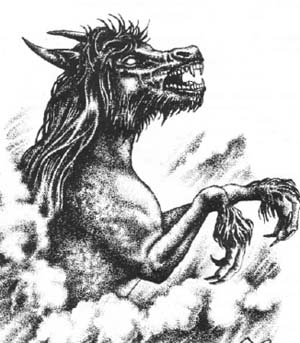 The fierce each uisge

The each uisge or each uisce, each uisge, aughisky is a Scottish Highland Water Horse.

The each uisge belongs to the same family of water horses as the Irish aughisky, the cabyll-ushtey and glashtin of Manx folklore and ceffyl dwfr of Welsh folklore.

After the each uisge carried the unsuspecting victim into the water, it would tear the victim apart and devour the entire body except for the liver. As long as the each uisge is ridden in the interior, he is rather harmless. But the merest glimpse or smell of water would mean the end of the rider.

The each uisge is reputed to be the fiercest and most dangerous of the Water Horses, although the Cabyll-Ushtey runs close. Like the kelpie, it is a shapeshifter. It may appear as a gigantic bird or a handsome young man. The creature usually assumes human shape, attracts women, and can be recognized only by the water weeds in his hair.

The water-horse inhabits salt water or large still bodies of inland water, and is thus distinguished from the kelpie inhabiting running water. Like its cousin, the uisce, the each uisge is said to kill those who dare to ride it.

Cautionary tales were once told how an each uisge once appeared as a pretty little pony to several little girls near Aberfeldy, Tayside (until 1974, Perthshire). As they mounted the pony, its back lengthened to accommodate them. Although the horse ran to and fro among the rocks, the children could not be unseated; next morning their livers floated to the top of a nearby lochan. A smith of the isle of Raasay vowed revenge when an each uisge devoured his beautiful daughter. Working with his son, he lured the each uisge with a roasted sheep and then held it tight in iron hooks until morning.