Ellert and Brammert are two evil giant robbers, the first one being the son of the second, who lived on the moors of Drenthe, a province in the north of the Netherlands. 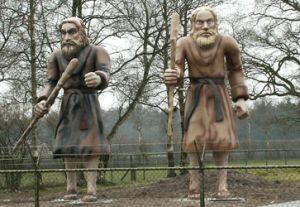 The people who lived along the edges of the moors would not go into it for fear of being killed. Unwarned travellers, though, who took a short-cut across the moors, were caught, dragged to the giants’ hole, robbed of their possessions and killed. The giants had stretched a rope crossed over the street, that led up to inside their haunt. A bell had been fastened at the end of the rope and when it rang, it was a sign for the bandits, that passengers or heavy loaded wagons passed their hole. Nowadays it said that you can see the pale shades of Ellert and Brammert dwelling around, when you walk in the moor at the murderhole round midnight. Their transparent hands are besmeared with blood and with a frightening scream they dissolve the darkness of the night. The grave has refused them a resting place.

One day they captured a beautiful farmers daughter. The evil men took here in their home and she had to wash the dishes, make the food but she also was captured for sexual intercourse. Seven years long and every year a baby was born. Seven babies were killed by the ruthless guys. After that seven years one day the young girl, alone with the father, took an axe and killed the sleeping giant. She runs away heading for her own house far away. Suddenly Brammert was after her. He threw a war-axe to kill the poor girl. But lucky she was, the axe missed her and got stuck in the doorpost of the house of her parents. The villagers were very happy that the young woman was coming home but they where still afraid of the giant. So all the people left the region and tried to make a living elsewhere.