The Emela-ntouka is an African legendary creature in the mythology of the Pygmy tribes, and a cryptid said to live in Central Africa. 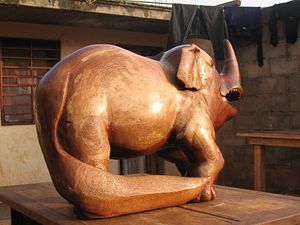 The Emela-ntouka is thought to be around the size of an African Bush Elephant, brownish to gray in colour, a heavy tail (but shorter than the Mokele-mbembe), and with a body of similar shape and appearance to a rhinoceros, including one long horn on its snout. Keeping its massive bulky body above ground level likely requires four short, stump-like legs. It has no frills or ridges along the neck. The animal is semi-aquatic and feeds on Malombo- and other leafy plants. In contrast to the Mokele-mbembe, the Emela-ntouka utters only one sound, described as a snort, rumble or growl. The Congolese animal is said to possess a large, single horn which it uses to attack and disembowel elephants, hippos and anything else that gets in its way. The Cameroonian animal possesses two horns, three or six horns that are placed side-by-side on the top of the animal’s head rather than the snout.

Not only the number but also the structure of its horn(s) is debated among writers on the subject. If the "horn" is ivory, then it is a tusk (tooth) and not a horn at all. Some rhinoceroses do have tusks, especially the Asiatic one-horned kinds. If it is made of bone, then this would point to a ceratopsian; this group's rostral bone is unique in the animal kingdom. Finally, the horn could be made of keratin, as are the horns of African rhinos.

This cryptid is thought to mainly inhabit the vast shallow waters in the swamps and lakes of the Congo River basin, especially in the Likouala swamps in the Republic of the Congo, and possibly Cameroon. It is also said to inhabit Lake Bangweulu in Zambia. They are thought not to live in herds or groups, but to be solitary animals. Almost every theory about their identity points to their being herbivorous. The inhabitants of the area are said to treat the creature with great fear.

J.E. Hughes published his book Eighteen Years on Lake Bangweulu in 1933, in were he reported that an animal that fits the description of an Emela-Ntouka (although not adressed to by this name) was slaughtered by Wa-Ushi tribesmen, along the shores of the Luapula River, which connects Lake Bangweulu to Lake Mweru.

The Emela-Ntouka was mentioned by name for the first time in 1954, in an article in the journal Mammalia, authored by former Likouala game inspector Lucien Blancou. He stated the Emela-Ntouka was "larger than a buffalo" and dwelled troughout the Likouala swamps. It was also Blancou who first mentioned the fact that an Emela-Ntouka kills elephants, buffalo's or hippo's when disturbed[3], much like the Mokele-mbembe's renowned hatred for Hippo's. While both animals are both supposedly herbivorous, they also share a fierce sense of territoriality, it is for this that the pygmies "fear it more than any other dangerous animal". At about 1930, an Emela-Ntouka was supposedly killed near Dongou.

Later evidence was contributed by Dr. Roy P. Mackal, who led to expeditions into the Congo in 1980 and 1981. He gathered details on various other cryptids. 1987 saw the publication of Mackal’s book, A Living Dinosaur, wherein he summarized the expeditions. The natives in the northwest region of the Likoula swamp told him that this animal would gore elephants with its single horn.

In November 2000, William Gibbons and David Wetzeldid, while visiting with a group of pygmies, were informed about an animal called Ngoubou. The pygmies asserted that it was not a regular rhinoceros, as it had more than one horn and that the father of one of the senior members of the community had killed one with a spear a number of years ago. However, the locals have noted a firm dwindle in the population of these animals lately, and are hard to find.

A popular theory is that the mysterious monster is in fact a surviving ceratopsian. Proponents of this theory believe that the Republic of the Congo is home to many prehistoric animals such as living dinosaurs, including the Mokele mbembe and Mbielu-Mbielu-Mbielu (possibly sauropod dinosaurs). In 1981, Dr. Roy Mackal while searching the Congo for the Mokele-mbembe, collected accounts of the Emela-ntouka. Mackal initially considered that Emela-ntouka might be a Monoclonius, or a Centrosaurus, both part of the Ceratopsian family. As such, it might be related to the N'goubou, which might be a six-horned Styracosaurus. However Mackal also noted the pygmies did not report a neck frill, which he would have expected on a ceratopsian. Furthermore, the Ceratopsia are absent from Africa's fossil record. Author Loren Coleman suggested that the Emela-Ntouka is not saurian, but a new sub-species of semi-aquatic rhinoceros. Gibbons indentified the animal with a Styracosaurus, but these are currently only known to have inhabited North America.