Encantados are river-dwelling spirits who can take either human form or the form of an animal; especially the boto, the bizarre long-beaked freshwater dolphins of the Amazon. 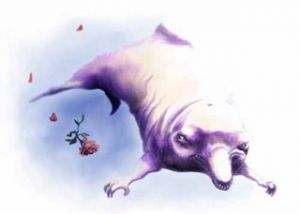 Encantado is a word in Brazilian Portuguese that roughly translates as "enchanted one." The term is used for creatures who come from a paradiasical underwater realm called the Encante.

In human form they are pale-skinned and graceful, dressed usually in bright clothes in an old-fashioned style. Their transformation is never fully complete, however: an encantado will always have a bald spot on the top of its head where its dolphin blowhole remains. For this reason, the encantado always keeps his head covered, usually with a broad-brimmed straw hat. The encantado is better at assuming its dolphin form, though strange boto with flippers ending in human hands have been reported.

There are three elements that best characterize encantados: superior musical ability, their seductiveness and love of sex (often resulting in illegitimate children), and their attraction to parties. The encantado are curious about human society, and they are particularly fond of festivals and parties where they can enjoy music and dancing. It is not unheard-of for an enchanted one to dwell on land long-term, making a living as a musician. Kidnapping is also a common theme in such folklore. Encantados are said to be fond of abducting humans they fall in love with, children born of their illicit love affairs, or just anyone near the river who can keep them company, and taking them back to the Encante.

The fear of this is so great for many Brazilians that many people, children and adults alike, are terrified of going near the water, especially alone. Some who have encountered encantados out in canoes have been said to have gone insane, although the creatures seem to have done little more than follow their boats and nudge them from time to time.

This fascination with people shows its dark side when a lovestruck encantado abducts a human girl back to its home in the underwater city called the Encante. Most of these girls never return from this mystic place, and those that somehow escape their abductors are never quite right in the head. Many return pregnant; this happens often enough that it’s common in some areas for any child whose father is unknown to be called a “child of the boto.”

However, transformation into human form seems to be rare, and usually occurs at night. The encantado will often be seen running from a festa, despite protests from the others for it to stay, and can be seen by pursuers as it hurries to the river and reverts back to dolphin form.

Besides the ability to shapeshift into human form, encantados frequently wield other magical abilities, such as the power to control storms, "enchant" or haunt humans into doing their will or becoming encantados themselves, and inflict illness, insanity, and even death.

Shamans and holy men are often needed to intervene and ameliorate the situation. To break the spell, a medicine man or wise woman must cast a magical powder -- a mixture of manioc flour and dried crushed chile peppers works well -- over the water where the encantado is known to appear. This powder will usually break the spell and drive the creature away, and any gifts it may have given the victim, such as jewelry or fine clothes, will revert to their true forms: rotting leaves and other river trash. It is of critical importance to keep the victim away from the river, using restraints if necessary; they will be drawn to the water, pulled irresistibly by the power of the encantado.

Although belief in them is starting to wane, there are still plenty of South Americans who believe in their existence ardently, and claim to have seen and interacted with them, or even that they are related to them. They share the most of the same themes and features as the fairies of European folklore.

The following is a free excerpt from the book Half Human, Half Animal: Tales of Werewolves and Related Creatures:

The power that encantados have over the opposite gender is clear in many stories. They say that a man named Jesse was at a dance when two handsome strangers in white suits showed up and mesmerized the girls. These two fellows displayed some new dance steps that the people hadn't seen before, and everyone assumed it must be the latest fad. They also drank more alcohol than any man there. During the dance, Jesse's grandmother took him aside and told him that the two strangers were assuredly dolphins in human disguise. She was a wise woman who had seen many things, and Jesse knew that she must be right.

When the two strangers slipped outside shortly before dawn, Jesse followed. He knew that the river was too far away for them to make it there before sunrise, especially as drunk as they were. He lost them, but continued along the road towards the river. Then he found two dolphins in a tiny pool that was little more than a mud hole. These dolphins reeked of alcohol, so Jesse had no doubt that they were encantados. The dawn had indeed caught the two strangers before they could make it to the river. Jesse killed these two helpless dolphins, but afterwards he felt terribly guilty about it, just like he would feel if he had murdered people. But the damage had already been done. Jesse's girlfriend had fallen so thoroughly in love with one of the dolphin men that she refused to marry anyone else for the rest of her life and became an old spinster.

Most commonly, the stories involve a type of freshwater dolphin which lives in the Amazon River called the Boto. It is larger and more primitive-looking than the other type of Amazonian dolphin, the Tucuxi.