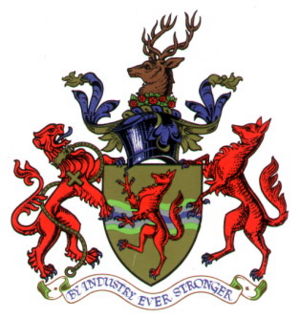 The coat of arms of the London Borough of Enfield, featuring an Enfield on the shield and as the sinister supporter

The Enfield is a chimera sometimes used in heraldry, said to have the head of a fox, the chest of a greyhound, the body of a lion, the hindquarters and tail of a wolf, and forelegs like an eagle's talons.

It is used as an emblem by some organisations in Enfield, London (for example, on the arms of the London Borough of Enfield), but it is not sure whether it has any historic connection with the town. Its roots may be Irish.

According to some sources, the Enfield protected the bodies of fallen chieftains for proper burial.