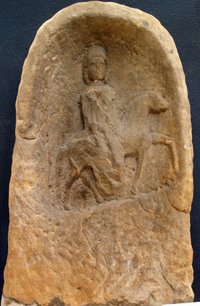 In Gaulish and (later) Roman and Gallo-Roman mythology, Epona was the goddess of horses, donkeys, mules.

She was particularly a goddess of fertility, as shown by her attributes of a patera, cornucopia, and the presence of foals in some sculptures (Reinach, 1895). Unusually for a Celtic deity, most of whom were associated with specific localities, the worship of Epona was widespread between the first and third centuries CE.

Although only known from Roman contexts, the name Epona is from the Celtic language Gaulish; it is derived from epos, horse or epa, mare (compare Latin equus, Greek hippos) together with the -on- frequently, but not exclusively, found in theonyms (for example Sirona, Matronae), and the usual Gaulish feminine singular -a. (Delmarre, 2003 pp.163-164).

Although the name is in origin Gaulish, dedicatory inscriptions to Epona are in [Latin or, rarely, Greek and were made not only by Celts but also Germans, Romans and other inhabitants of the Roman Empire. Her feast day was December 18 as shown by a rustic calendar from Guidizzolo, Italy (Vaillant, 1951). According to the French historian Benoît (1950), she was also a psychopomp, accompanying souls to the land of the dead, although this interpretation is disputed.

The cult of Epona was spread over much of the Roman Empire by the auxiliary cavalry, alae, especially the Imperial Horse Guard or equites singulares augustii recruited from Gaul, Lower Germany, and Pannonia. A series of their dedications to Epona and other Celtic, Roman and German deities was found in Rome, at the Lateran (Spiedel, 1994). As Epane she is attested in Cantabria, northern Spain, on Mount Bernorio, Palencia (Simón).

Sculptures of Epona fall into two types. In the Equestrian type, common in Gaul, she is depicted sitting side-saddle on a horse or (rarely) laying on one; in the Imperial type (more common outside Gaul) she sits on a throne flanked by two or more horses or foals (Nantonos, 2004).

Epona is mentioned in The Golden Ass by Apuleius, where an aedicular niche with her image on a pillar in a stable has been garlanded with freshly-picked roses, "respicio pilae mediae, quae stabuli trabes sustinebat, in ipso fere meditullio Eponae deae simulacrum residens aediculae, quod accurate corollis roseis equidem recentibus fuerat ornatum." (iii.27). In Robert Graves' translation of The Golden Ass, he has interposed an explanatory "the Mare-headed Mother" that does not appear in the Latin text; it would have linked Epona with the primitive mythology of Demeter, who was covered as a mare by Poseidon in stallion-form and gave birth to Persephone; Demeter was venerated as a mare in Arcadia into historical times. There is no justification for linking Epona with Demeter, however, and in the Satires by Juvenal's Satires.

The giant chalk horse carved into the hill at Uffington, in what is now southern England, is believed by some to be associated with her, although the probable date of ca. 1400 BCE makes this unlikely.

Part of this article consists of modified text from Wikipedia, and the article is therefore licensed under GFDL.
Retrieved from "https://www.monstropedia.org/index.php?title=Epona&oldid=8356"
Categories: