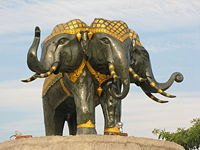 Erawan (เอราวัณ) is the Thai name of Airavata. It is depicted as a huge elephant, having three, sometimes with 33 heads. The heads are often shown with more than two tusks. Some statues show the Hindu god Indra riding on Erawan.

"It is sometimes associated with the old Lao Kingdom of Lan Xang and the defunct Kingdom of Laos. They had used Erawan, more commonly known as "The three headed elephant" as their Royal Flag."- Frank E. Reynolds (Transl.): Three worlds According To King Ruang: A Thai Buddhist Cosmology. Berkeley 1982, ISBN 0-89581-153-7