King Erichthonius (also called Erichthonios) is an early mythical king of Athens, who was, according to some legends, autochthonous (born of the soil) and raised by the goddess Athena. 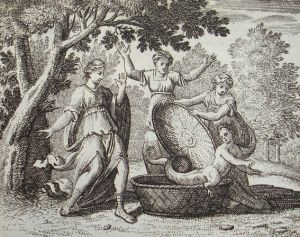 Erichthonius is sometimes described as a normal infant with two snakes guarding him. In a later myth he is described like a snake with human head, similarly as Cecrops.

According to Apollodorus, Athena visited Hephaestus to request some weapons, but Hephaestus was so overtaken by desire that he attempted to seduce her in his workshop. Determined to maintain her virginity, Athena fled, but despite Hephaestus' lameness, the smith-god caught Athena and unsuccessfully attempted to rape her. During the struggle, his semen fell on her thigh, and Athena, in disgust, wiped it away with a scrap of wool. She threw it to the ground, impregnating Gaia. Gaia returned the infant son to Athena, who named him Erichthonius, from chthon "earth", and placed him in a small box.

The snake is his symbol, and he is represented in the statue of Athena in the Parthenon as the snake hidden behind her shield.

Athena then brought the basket into the sanctuary of the Athenian Acropolis and insisted to her priestesses, the three daughters of Cecrops, the king of Athens: Herse, Pandrosus and Aglaulus that they never open it. Overcome with curiosity, Aglaulus and Herse (although sources are unclear whether only one sister, or all three participated) opened the box which contained the infant and future-king, Erichthonius . The sisters were terrified by the sight that awaited them - either a snake coiled around an infant, or an infant that was half-man and half-serpent - the sisters went insane and threw themselves off the Acropolis. Other accounts state that they were killed by the snake.

An alternative version of the same story is that, while Athena was gone bringing a mountain from Pallene to use in the Acropolis, the sisters, minus Pandrosus again, opened the box. A crow witnessed the opening and flew away to tell Athena, who fell into a rage and dropped the mountain (now Mt. Lykabettos). Once again, Herse and Aglaulus went insane and threw themselves to their deaths off a cliff.

When he had grown, Ericthonius drove out Amphictyon, who had usurped the throne from Cranaus twelve years earlier, and became king. He married Praxithea, a naiad, and had a son, Pandion I. During this time, Athena frequently protected him. He founded the Panathenaic Festival in the honor of Athena, and set up a wooden statue of her on the Acropolis. According to the Parian marble, he taught his people to yoke horses and use them to pull chariots, smelt silver and till the earth with a plough. It was said that Erichthonius invented the quadriga, or four-horse chariot. Ericthonius was succeeded by his son Pandion I.

The Birth of Erichthonius was depicted on some Athenian red figured vases. Mainly the scene of Codrus Painter on the vase from the Classical period, which is in the British Museum in London, represents well the mythological story. Gaia is giving the child into the hands of Athena, while Hephaestus, Cecrops and one of his daughters, Herse, are standing around them. The same theme -the birth of Erichthonius-, surrounded by the other Olympian gods in a rich and ornate style, was used to decorate a later classical calyx crater at the British Museum in London. The so-called Erichthonius Painter is the author of a lovely scene on the pelike of the Classical period, also in the British Museum. Erichthonius as a young boy is sitting in his chest on the rocks of Acropolis, while two snakes are guarding him and his basket is nearby. He is making a sign to Athena, who is coming to see him, while she is holding her helmet and scepter in her hands. 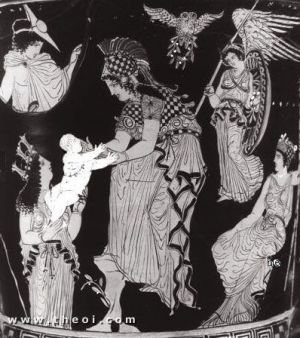