Eurynome is a lunar Goddess of ancient Greek religion and a demon in modern demonology. 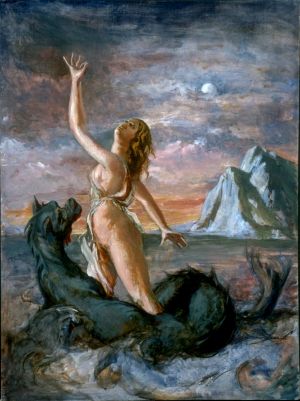 The name is usually segmented Eury-nome, where eury- is “wide”. This segment appears in Linear B as e-u-ru–, a prefix in a few men’s names. It does not occur in any Mycenaean women’s names, nor does –nome. The root of –nome is Proto-Indo-European *nem-, distribute, as in the Greek infinitive, nemein, “to distribute.” Words derived from *nem- had a large variety of senses. In the case of Eurynome, the two main senses proposed are “wanderer” and “ruler”. "Wide wandering," would then refers to the moon traveling across the sky.

She was represented by a statue of what we would call a mermaid.

And Eurynome, the daughter of Ocean, beautiful in form, bare him three fair-cheeked Charites (Graces), Aglaea, and Euphrosyne, and lovely Thaleia, from whose eyes as they glanced flowed love that :unnerves the limbs: and beautiful is their glance beneath their brows. - Theogony (ll. 907-911)

According to Collin de Plancy, Eurynome wears a fox skin to cover the sores covering his body, and he has huge teeth. A statue of him exists in the temple of Delphi depicting him having a black complexion, huge wolf-like teeth, and sitting on a vulture skin. Pausanias said he fed on carrion and dead bodies.

Eurynome was easily the most important Goddess of Pelasgian myth. She was worshipped at a sanctuary near the confluence of rivers called the Neda and the Lymax in classical Peloponnesus. She was the Great Goddess, Mother, Creatrix, Ruler, called the Goddess of All Things.

Eurynome was born from Chaos, and her first work was to separate the water from the sky. When she had accomplished this, she began to dance across the water. It was a beautiful, sensual dance of creation. As she danced, she danced South, and faster and faster she danced until a wind grew behind her. Eurynome caught this new thing, this wind, between her hands and rubbed it into a snake. The snake, called Ophion, watched as the Goddess danced and danced to keep herself warm. He saw Eurynome dancing across the waves and was filled with lust. He coiled his body around the Goddess seven times and made love to her as she danced. Impregnated by Ophion, soon the Goddess lay the Universal Egg. Ophion wrapped his body around it seven times at Eurynome's bidding. As it opened, the earth spilled forth, born populated with animals and plants.

At this point the Mother ascended to Mt. Olympus and began to watch her children take shape. When she ascended, the serpent Ophion followed her as the Goddess's consort. Eurynome had no problem with this, but when Ophion began to swagger and boast that he alone was responsible for the creation of the world, Eurynome kicked all his teeth out as she threw his butt out of heaven.

In the later Titan cults that preceded the Olympic cults, Eurynome was considered the daughter of Oceanus the Titan. She was a Titaness married to the Titan Ophion. But in this version, though Eurynome still ruled heaven, Ophion ruled as an equal. The two ruled together on Mt. Olympus until Cronos replaced Ophion and Rhea replaced Eurynome. By the time classical mythology came around, Eurynome had shrunk to being one of Zeus' many loves (mother of the Charites) and a gentle Oceanid. A far cry from the All-Powerful Great Goddess she was once worshipped as.

She and Ophion ruled over Olympus until they were dethroned by Saturn (Cronos) and Rhea (Ops). Ovid says of her:

In the Dictionnaire Infernal (1863), Collin de Plancy consider Eurynome as a superior demon and the prince of death. 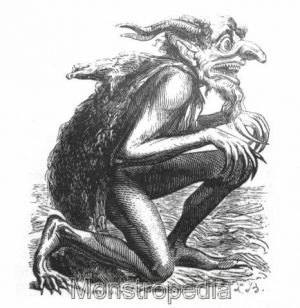 Some major sources are paraphrased or quoted below.

The earliest known reference to the Oceanid is a passage in the Iliad relating what happened to Hephaistos after his mother, Hera, threw him from Olympos. Thetis and Eurynome, the daughter of Oceanus, offered him refuge. He stayed with them for nine years in their cave at the edge of the ocean making splendiferous artifacts.

355. Eurynome is among the daughters of Ocean and Tethys.
907. Eurynome bore the Graces to Zeus.

Homer and Hesiod establish that a belief in the Oceanid existed in the earliest literary times. The most likely circumstance, based on the testimony of Pausanias, is that both authors took their themes from a religion known to and believed in by all the Hellenes; thus, it is probably best to assume that Eurynome the Oceanid is the same Oceanid of ancient Greek belief mentioned in all the classical sources.

Eurynome is believed by the people of Phigalia to be a surname of Artemis. Those of them, however, to whom have descended ancient traditions, declare that Eurynome was a daughter of Ocean, whom Homer mentions in the Iliad, saying that along with Thetis she received Hephaestus. On the same day in each year they open the sanctuary of Eurynome, but at any other time it is a transgression for them to open it.

On this occasion sacrifices also are offered by the state and by individuals. I did not arrive at the season of the festival, and I did not see the image of Eurynome; but the Phigalians told me that golden chains bind the wooden image, which represents a woman as far as the hips, but below this a fish. If she is a daughter of Ocean, and lives with Thetis in the depth of the sea, the fish may be regarded as a kind of emblem of her. But there could be no probable connection between such a shape and Artemis.”

Hesiod repeats that the Graces are the offspring of Zeus and Eurynome.

"And fabled how the serpent, whom they called
Ophion, with Eurynome, (the wide-
Encroaching Eve perhaps,) had first the rule
Of high Olympus, thence by Saturn driven."
[Paradise Lost, Book IX, Line 581]

Robert Graves, one of the chief scholars interested in the creation myth as related by Apollonius of Rhodes for Ophion and Eurynome, hypothesized that Eurynome originally was another manifestation of the Neolithic mother goddess.