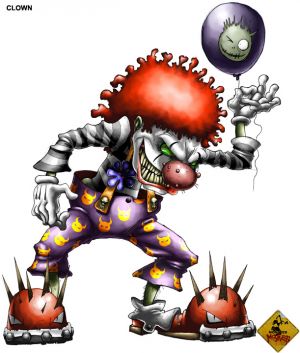 The image of the evil clown appears to be a recent development in popular culture in which the playful trope of the clown is rendered as disturbing through the use of horror elements and dark humor.

Many people find clowns disturbing rather than amusing. This may have origins in childhood trauma. Many children are afraid of disguised, exaggerated, or costumed figures — even Santa Claus — and an unfortunate childhood experience with a clown could have long term consequences. Clown costumes tend to exaggerate the facial features and some body parts, such as hands and feet. This can be read as monstrous or deformed as easily as it can be read as comical. At the same time, the clown act is often represented as drunken, reckless, or simply insane — that of the giggling maniac. This includes the notorious Canio who murdered Nedda and Silvio (recorded in Leoncavallo's opera Pagliacci.)

An extreme fear of clowns is known as coulrophobia. It is sometimes also referred to as caulrophobia, or clownophobia.

It can also be said one's response to a clown might depend on where it's seen. At a circus or a party, a clown is normal and one may find a clown funny. The same clown knocking on one's front door late one evening is more likely to generate fear or distress than laughter or amusement. This effect is summed up in a quote often attributed to actor Lon Chaney, Sr.: "There is nothing funny about a clown in the moonlight."

John Wayne Gacey, (March 17, 1942 – May 10, 1994) was an American serial killer. He was convicted and later executed for the rape and murder of thirty-three boys and men, 28 of whom he buried in his crawl space, between 1972 and his arrest in 1978. He became notorious as the "Killer Clown" because of the many block parties he attended, entertaining children in a clown suit and makeup, under the name of Pogo the Clown.

The wide publicity of Gacy's crimes is often presumed to have a strong influence on the idea of an evil clown.

The evil clown in popular culture

The image of the evil clown appears to have gained notoriety in the late twentieth century, to the extent of becoming a cliche. 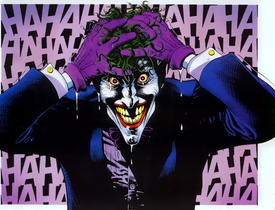 The Joker, the archetypal clown supervillain 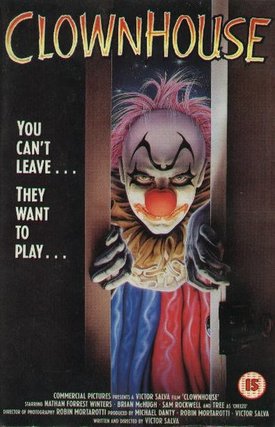 Movie poster for the 1989 film Clownhouse.