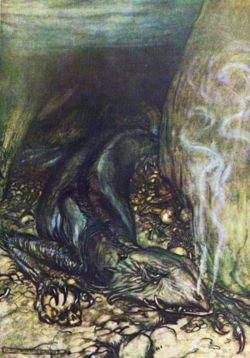 Fáfnir guards the gold hoard in this illustration by Arthur Rackham to Richard Wagner's Siegfried.

In Norse mythology, Fáfnir or Frænir was a son of the dwarf king Hreidmar and brother of Regin and Ótr. In the Volsunga saga, Fáfnir was a dwarf gifted with a powerful arm and fearless soul. He wore the Aegis helmet and guarded his father's house of glittering gold and flashing gems. He was the strongest and most aggressive of the three brothers.

After Ótr was killed by Loki, Hreidmar received the cursed gold of Andvari's as repayment for the loss of his son. Fáfnir and Regin then killed their father to get the gold, but Fáfnir decided he wanted it all, turning into a dragon (symbol of greed) and disputed the gold to his brother. Regin, infuriated sent his foster-son, Sigurd, to kill the dragon. Sigurd succeeded by digging a pit under the trail Fáfnir used to walk to a stream and plunging his sword Gram into his heart as he walked past. Regin, however, corrupted by the curse on Andvari's gold, planned to kill Sigurd to take the treasure for himself, but Sigurd, having eaten part of Fáfnir's cooked heart, was warned by birds of Regin's attack and ended up killing him.

The Völsunga Saga is an Icelandic interpretation made by the end of the XIII century -century of origin and declination of the Volsung clan in which the existence of Sigurd, Brynhild and the destruction of the Burgundians - is documented. The German epic poem Nibelungenlied (The Song of the Nibelungs) is based on these old histories, that were popular in all the Germanic lands, but re-tells the traditional material and includes ingredients of the medieval scope of the court.

Nibelungenlied tells that Siegfried was the one who killed the dragon in the court of the Burgundians, thanks to this he could become owner of the treasure of the Nibelungs. After killing him, he bathed in the blood of this mythical animal and became an invulnerable man, except by a small weak point that was left, where a linden tree leaf fell while he was soaked with the blood of Fafnir: his back. Like Achilles' heel, his back will be the fatal spot that the treacherous Hagen will choose to betray him.

As Fafner, he is featured in Richard Wagner's Der Ring des Nibelungen, although he began life as a Jotun rather than a dwarf, before once again turning into a dragon to better guard the gold.

Some versions are more specific about Fafnir's treasure hoard, mentioning the swords Ridill and Hrotti as part of it.

Part of this article consists of modified text from Wikipedia, and the article is therefore licensed under GFDL.
Retrieved from "https://www.monstropedia.org/index.php?title=Fafnir&oldid=9498"
Categories: