A familiar, sometimes called an "imp", is an attendant subordinate demon who obeys a witch, conjurer, or other users of the supernatural, and serves and helps that person. 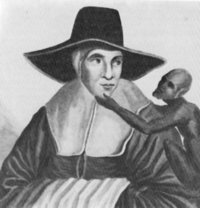 From Latin: famulus, related to family.

The most common species identified as familiars are cats, particularly black cats, owls, dogs, toads and sometimes wolves, bees, bats, blackbirds, spiders, flies, chickens. In later cases, familiars moved to more ethereal forms, often taking the shape of a "black man" thought to be representative of Satan. Although they may not be as intelligent as their masters, they are often as intelligent as the average human.

Such creatures drew nourishment by suckling from devil’s marks, a witch's breasts, or insensitive parts on a witch.These spirits are also said to be able to inspire artists and writers (compare with muses). Some reclusive wizards rely on familiars as their closest friends.

Familiars behaved in ways that no natural pet was believed to. They often performed domestic duties They ran errands, brought messages, help in farming but also aided their master in bewitching people. If they look like ordinary animals, they can be used to spy on their masters' enemies.

Familiars are generally animals or such beings. They usually have some magical power, or are simply there to advance the story. In many modern fantasy stories, a magician's familiar is a magical creature, such as Vlad's flying lizardlike familiar, Loiosh, in Steven Brust's Vlad Taltos series. Furthermore, in many cases the power of the familiar is directly proportional to the power of the wizard.

The form taken by the familiar is also influenced by the personality of its master as in the His Dark Materials trilogy by Philip Pullman, though the comparison is not perfect, the nature of Pullman's dæmons being dissimilar from standard notions of a familiar.

The relationships between familiars and their masters vary by story. Some familiars do not have free will and are nothing more than tools of their masters while others are willing servants who can make their own decisions and would leave their masters if mistreated.