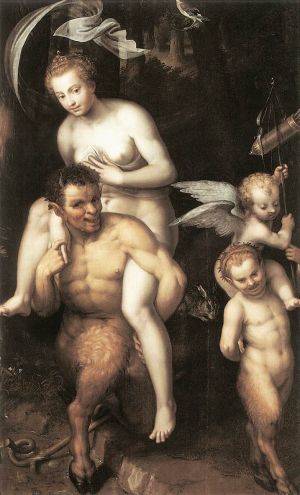 The Fauns come from Roman mythology and are similar to the satyr. They are the children of the god Faunus and were minor divinities to the Italians.

They have the legs, hooves, horns of goat and the torso and head of a man.

Fauns are said to be the guardians of the woods and fields.

In Roman mythology, fauns are place-spirits (genii) of untamed woodland. Romans connected their fauns with the Greek satyr, wild and orgiastic drunken followers of Dionysus.

However, Fauns and satyrs were originally quite different creatures. Both have horns and both resemble goats below the waist, humans above; but originally satyrs had human feet, fauns goatlike hooves. The Romans also had a god named Faunus and a goddess Fauna, who, like the fauns, were goat-people.

Faunus reproduced himself in Fauns, half man half goat satyrs.

They were rural spirits who rejoiced in nature and the company of Nymphs. Thus Faunus personality was spread and increased.

Part of this article consists of modified text from Wikipedia, and the article is therefore licensed under GFDL.
Retrieved from "https://www.monstropedia.org/index.php?title=Faun&oldid=8750"
Categories: