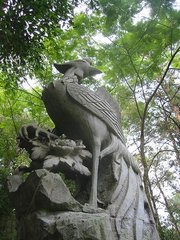 The males are called Feng and the females Huang. In modern times, however, such a distinction of gender is often no longer made and the Feng and Huang are blurred into a single feminine entity so that the bird can be paired with the Chinese dragon, which has male connotations. Han Chinese often use the term "Descendants of the Dragon" as a sign of ethnic identity. The Fenghuang is also called the "August Rooster". In the West, it is commonly referred to as the Chinese phoenix and occasionally Ho-ho bird (from the Japanese name ho-o).

According to scripture Erya - chapter 17 Shiniao, the Feng-huang is made of all the most desirable parts of earth's creatures: the snake's neck, the crane's forehead, the dragon's stripes, the fish's tail, the tortoise's shell, the swallow's throat, and the fowl's bill. It carries in its bill either two scrolls or a square box that contains sacred books. According to tradition, the phoenix's song includes all the five notes of the traditional musical scale; its feathers include the five fundamental colors and its body is a composite of the six celestial bodies: the head symbolizes the sky; the eyes, the sun; back, the moon; the wings, the wind; feet, the earth; and the tail, the planets. It is sometimes pictured with a fiery ball representing its association with the sun. It is the emperor of birds and is called the "scarlet bird." A common depiction was of it attacking snakes with its talons and its wings spread.

Fenghuang, the Chinese phoenix, has no connection with the phoenix of the Western world. The images of the phoenix have appeared in China for over 7,000 years, often in jade and originally on good-luck totems. It is a totem of eastern tribes in ancient China. Current theories suggest that it may be a representation of a large pre-historic bird, similar to an ostrich, which were common in pre-historic China.

The Feng-huang lives in the Kingdom of the Wise, which is somewhat to the east of China. It drinks the purest water and eats bamboo. Whenever it sings, all the roosters in the world join in its five-noted melody. Its marrow is considered heavenly food. It appears in peaceful and prosperous times but hides when trouble is near. At conception, this remarkable bird delivers the soul of the infant to its mother's womb.

During the Han Dynasty, the phoenix was used as a symbol depicting the direction south, shown as a male (feng) and female (huang) phoenix facing each other. It was also used to symbolize the Empress in a pairing with a dragon where the dragon represents the Emperor. This is because the Chinese considered the dragon and phoenix symbolic of blissful relations between husband and wife, another common yin and yang metaphor. Shan Hai Jing - chapter 1 Nanshan jing records each part of Fenghuang's body symbolizes a word, the head represents (德), the wing represents duty (義)，the back represents propriety (禮) the abdomen says belief (信) and the chest represents mercy (仁). If a phoenix was used to decorate a house it symbolized that loyalty and honesty were in the people that lived there. Or alternatively, phoenix only stays when the ruling is without dark and corruption. A pair of Feng-huangs symbolizes marital bliss.