In Norse mythology, Fenrir or Fenrisulfr is a monstrous wolf, the son of Loki and giantess Angrboda. 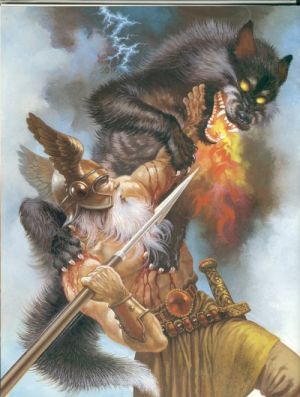 Fenrir is bound by the gods, but is ultimately destined to grow too large for his bonds and devours Odin during the course of Ragnarök. At that time he will have grown so large that his upper jaw touches the sky while his lower touches the earth when he gapes. After killing Odin he gets murdered by Odin's son, idar , who, according to different accounts, either stabs him in the heart or rips his jaws asunder.

Fenrir has two sons, Hati ('hate') and Skoll. These sons chase the horses Arvak' and Alsvid, that drag the chariot which contains the sun. Hati also chases the god Mani, the moon. Skoll, in certain circumstances, is used as a heiti to refer indirectly to his father and not the son. This ambiguity also works in the other direction, for example in the Vaf_rú_nismál, where Fenrir is given the sun-chasing attributes of his son Skoll.

Learning from the prophecy of the sybil Völuspá and from his contest with Vaf_rú_nir that the children of Loki and Angrbo_a would bring trouble to the gods, Odin had the wolf brought to him along with his brother Jormungand|Jörmungandr and his sister, goddess Hel. After casting Jörmungandr into the sea and Hel down into the land of the dead, Odin had the wolf raised among theÆsir. Only the god Tyr was daring enough to feed the growing monster. The gods urged by the wolf's increasing strength and by prophecies that he would be their destruction, attempted to bind the great beast. Twice he agreed to be chained and twice easily burst out of two successive fetters. The first, made of iron; the second, also of iron, but of twice the strength. Odin then had the dwarfs forge the chain Gleipnir ("deceiver" or "entangler"). It appeared to be only a silken ribbon but was made of six wondrous ingredients: the sound of a cat's footfall, the beard of a woman, the roots of a mountain, bear's sinews (meaning nerves, sensibility), fish's breath, and bird's spittle (which explains why these things are not found today). Skirnir, Freyrs messenger, brought it back to Asgard|Ásgar_r. Then, in the island called Lyngvi ("Heathery") in the lake called Ámsvartnir 'Red-black' (places unknown to us), the gods challenged Fenrisulfr to break this chain also. But the wolf noted the thinness and fineness of construction of Gleipnir and not unreasonably suspected a trick. He agreed to make the test only if one of the gods was willing to place his hand in the wolf's mouth during the binding as a pledge to free him if he failed to break the chain. No god was willing to do this, until T_r stood forth and placed his hand in the wolf's mouth. Fenrisulfr strained to burst the chain but the more he struggled the tighter he was held. When the gods would not free him, the wolf bit off T_r's hand at the wrist, the point afterwards called "the wolf joint". When the Æsir saw that the Wolf was fully bound, they took the chain that was fast to the fetter, and which is called Gelgja 'Thin', and passed it through a great rock; it is called Gjöll 'Scream'and fixed the rock deep down into the earth. Then they took a great stone and drove it yet deeper into the earth; it was called Thviti; and used the stone for a fastening-pin. The Wolf gaped terribly, and thrashed about and strove to bite them; they thrust into his mouth a certain sword: the guards caught in his lower jaw, and the point in the upper; that is his gag. He howls hideously, and slaver runs out of his mouth: that is the river called Ván 'Hope'; there he lies till the Twilight of the Gods. It is prophesied that at Ragnarök the wolf will at last break free and join forces with the enemies of the gods and will then devour Odin himself. After that Vi_arr, Odin's son, will slay the wolf to avenge his father, either with a sword through the heart, or by tearing apart the wolf after placing one foot shod with a special shoe on its lower jaw and one hand on its upper jaw. 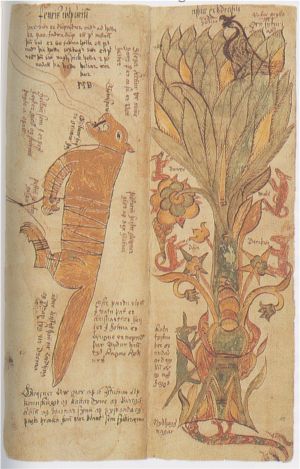 Other names and spellings

The most important source of our information about Fenrir appears in the "Gylfaginning" section of Snorri Sturluson's Edda, although there are other, often contradictory, accounts and sources which need to be assessed (e.g. in Lokasenna' Loki threatens Thor of destruction by the hand of Fenrir, after the latter killed Odin).

Part of this article consists of modified text from Wikipedia, and the article is therefore licensed under GFDL.
Retrieved from "https://www.monstropedia.org/index.php?title=Fenrir&oldid=9517"
Categories: