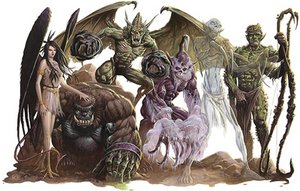 In the Dungeons & Dragons fantasy role-playing game, the player characters (fictional characters controlled by the players) often come into conflict with a variety of monsters from folklore and mythology. One of the game's more prominent monsters are the various races of demons, devils and other malicious otherworldly creatures, collectively referred to as fiends. These creatures are of wholly evil alignment and hail from the Lower Planes.

The tanar'ri and the baatezu hold an eternal enmity for one another and wage the Blood War against one another.

Fiends are all extraplanar outsiders.

The most common types

The most widespread race of fiends are the demons, a chaotic evil race native to the Abyss; they are rapacious, cruel and arbitrary. The dominant race of demons is the tanar'ri. The Abyss and its population are both theoretically infinite in size. "True" tanar'ri such as the balors (originally called Balrogs) and the six-armed serpentine mariliths push other weaker tanar'ri around and organise them into makeshift armies for battle. Demon lords and demon princes such as Orcus, Demogorgon, Zuggtmoy, Graz'zt and countless others rule over the demons of their individual layers of the Abyss, inasmuch as the chaotic demons can be ruled over.

The devils, of which the ruling type are called baatezu, are lawful evil natives of the Nine Hells of Baator; they subjugate the weak and rule tyrannically over their domains. Pit fiends are the most powerful baatezu, though even the strongest pit fiends are surpassed by the Lords of the Nine, or Archdevils, whose ranks include Baalzebul, Mephistopheles, and Asmodeus. Unlike the demons, the devils arranged themselves through a strict hierarchy. Like the demons, the devils are scheming backstabbers; while a demon only keeps its words when it is convenient for it, a devil keeps its word all too well; though being used to exploiting repressive bureaucratic machinations to the fullest, knows always ways around the letter of a contract to begin with.

The yugoloths (called daemons in 1st edition D&D) are neutral evil natives of the Bleak Eternity of Gehenna and the Gray Wastes of Hades; they are neutral to the affairs of the other fiendish races, interfering only when they see a situation that may be profitable or a potential for the advancement of their own schemes. The yugoloths are manipulative, secretive, and mercenary by nature, often acting as soldiers for deities in their own private wars, or even at times aiding both sides of the Blood War.

The demodands are race of evil fiends that live on the plane of Carceri (Tarterus in 1st edition D&D). Demodands were introduced in the 1st edition supplement Monster Manual II, renamed as Gehreleths in the 2nd edition Planescape Monstrous Compendium, and reintroduced as demodands in the 3rd edition sourcebook Fiend Folio. In 1st edition D&D, the three types of demodands from weakest to strongest were tarry, slime, and shaggy. In 2nd and 3rd editions, the three types are farastu, kelubar, and shator.

The kythons (not to be confused with kytons) are unique from the other fiends, in that they did not originate on any of the lower planes. When a group of fiends, (most likely the yugoloths) were trapped on the Material Plane, they tried creating more of their own kind through magical means. The results were eyeless reptilian creatures with insectoid traits and neutral evil traits. As the kythons matured, they took on varied forms. None of them were loyal to the fiends that created them. Because kythons originated on the Material Plane instead of the Abyss (or another lower plane), they are also called earth-bound demons. Kythons are only interested in eating and breeding. They have spread rapidly across the Material Plane. The current hierarchy of kythons, from the weakest to the strongest is: broodlings, juveniles, adults, impalers, slaymasters, and slaughterkings. Eventually, with more time, kythons will grow into newer and more powerful forms. Kythons closely resemble xenomorphs and were probably based on them.

Night Hags are fiends from the Gray Wastes of Hades that traffic in the souls of mortals.

Quori are fiends in the Eberron Campaign Setting.

Rakshasas are tiger-headed fiends that may have originated on Acheron.

Shadow Beasts hail from the Plane of Shadow, serving powerful warlords and extraplanar entities. They also hire out as mercenaries to powerful Material Plane masters.

Three types of shadow beasts are known to exist:

Other Fiends Not Part of a Specific Group

The cambions (whose name comes from a different kind of mythological, demonic creature) are simply half-fiends; hybrids of fiends and non-fiendish creatures, often humans or other humanoids. Cambions are typically created through fiends raping mortals or seducing them after shape-shifting, although some of the most depraved beings actually participate willingly. Those cambions that actually survive birth typically look like grotesque, hellish variants of their mortal progenitors, having wings, claws, fangs and often many other features that reveal their fiendish origins. Cambions are usually outcast, being feared and hated in mortal societies for their fiendish origins and being derided by pure-blooded fiends for their impure heritage. A variant of cambion called durzagon is described in Monster Manual II and is the hybrid of a devil and an unsuspecting duergar. The fiendish creatures are simply fiendish versions of other species in Dungeons & Dragons. They typically look like fearsome travesties of beings from the material plane. Most fiendish species are divided into a number of variants, usually in a hierarchy of increasing power and cunning.

Controversy and related changes between editions

A number of critics of Dungeons & Dragons (mostly fundamentalist Christians) have accused the game of promoting Satanism and occultism, most vociferously in the mid-1980s, but like heavy metal music, this is no longer as visible a target as it once was. Some products, particularly the Advanced Dungeons & Dragons First Edition Dungeon Master's Guide, have shown actual symbols classically used by witches and magicians for summoning, abjuration, and protection.

TSR, Inc. eliminated most references to occult symbols, demons, and devils from the second edition of the game under great pressure from anti-D&D negative publicity. When the creatures were reintroduced in the Monstrous Compendium supplement MC8: The Outer Planes, the terms "baatezu", "tanar'ri", "yugoloth", and "gehreleth" were introduced and were used exclusively in place of the terms "devil", "demon", "daemon", and "demodand", respectively.

Following a more relaxed attitude towards the hobby, Wizards of the Coast reinserted many of these excised references in the third edition of the game. This said, they kept intact the terms they had been replaced with, using both when applicable to appeal both to older players and those who played in subsequent editions of the game which introduced the use of the replacement terms (which were used during the 2nd edition of the game, in which the vast majority of material on the fiends of D&D was expanded and given depth). The latest edition of the game does not however use the 1st edition D&D term 'Daemon', instead continuing to use 'Yugoloth' in its place, leaving 'daemon' as an effectively defunct and abandoned term (in our world, daemon are something close to a muse, a divine inspiration in the Greek mythology and so effectively do not fill in the role of evildoer).