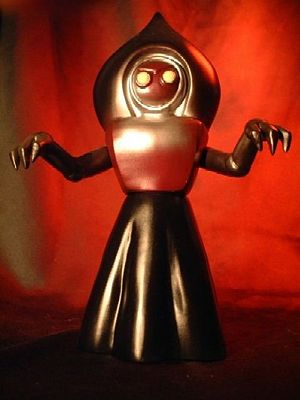 The Flatwoods Monster, also known as the Braxton County Monster or the Phantom of Flatwoods, is an alleged unidentified extraterrestrial or cryptid reported during an incident in the town of Flatwoods in Braxton County, West Virginia, USA on September 12, 1952.

There are two entities associated with the Flatwoods Monster.

At 7:15 PM on the evening of September 12, 1952, two brothers, Edward and Fred May, and their friend Tommy Hyer (ages 13, 12, and 10) witnessed a bright object cross the sky. The object appeared to come to rest on land belonging to local farmer G. Bailey Fisher.

Upon witnessing the object, the boys went to the home of the May brothers' mother, Kathleen May, where they reported seeing a UFO crash land in the hills. From there, Mrs. May accompanied by the three boys, local children Neil Nunley (14) and Ronnie Shaver (10), and 17 year old West Virginia National Guardsman Eugene 'Gene' Lemon, traveled to the Fisher farm in an effort to locate whatever it was that the boys had seen.

Lemon's dog ran ahead out of sight and suddenly began barking, and moments later ran back to the group with its tail between its legs. After traveling about ¼ of a mile the group reached the top of a hill, where they reportedly saw a large pulsating "ball of fire" about 50 feet to their right. They also detected a pungent mist that made their eyes and nose burn. Lemon then noticed two small lights over to the left of the object; underneath a nearby oak tree, and directed his flashlight towards them, revealing the creature, which is reported to have emitted a shrill hissing noise and to have begun to glide towards them before changing direction and heading off towards the red light. At this point the group fled in panic.

Upon returning home Mrs. May contacted local Sheriff Robert Carr, and Mr. A. Lee Stewert; co-owner of the Braxton Democrat, a local newspaper. Stewert conducted a number of interviews and returned to the site with Lemon later that night where he reported that "there was a sickening, burnt, metallic odor still prevailing". Sheriff Carr and his deputy Burnell Long searched the area separately, but reported finding no trace of the encounter.

Early the next morning; on Saturday September 13, Mr. A Lee Stewart visited the site of the encounter for a second time and discovered two elongated tracks in the mud, as well as traces of a thick black liquid. He immediately reported them as being possible signs of a saucer landing based on the premise that the area had not been subjected to vehicle traffic for at least a year. It would later be revealed that the tracks most likely belonged to a 1942 Chevrolet pickup truck driven by local Max Lockard; who had gone to the site to look for the creature some hours prior to Stewert's discovery.

After the event, Mr. William and Donna Smith; investigators associated with Civilian Saucer Investigation, LA, obtained a number of accounts from witnesses who claimed to have experienced a similar or related phenomena. These accounts included the story of a mother and her 21 year-old-daughter, who claimed to have encountered a creature with the same appearance and odor a week prior to the September 12 incident; the encounter reportedly affected the daughter so badly that she was confined to Clarksburg Hospital for three weeks. A statement from the mother of Eugene Lemon, in which she said that, at the approximate time of the crash, her house had been violently shaken and her radio had cut out for 45 minutes, and a report from the director of the local Board of Education in which he claimed to have seen a flying saucer taking off at 6:30 on the morning of September 13 (the morning after the creature was sighted).

After encountering the creature, several members of the September 12 group reported being overcome with similar symptoms which persisted for some time, which they attributed to having been exposed to the mist emitted by the creature. The symptoms included irritation of the nose and swelling of the throat. Lemon was reportedly the worst affected. He suffered from vomiting and convulsions throughout the night, and had difficulties with his throat for several weeks afterwards.

A doctor who treated several of the witnesses is reported to have described their symptoms as being similar to victims of mustard gas, though such symptoms are also commonly found in sufferers of hysteria, which can be brought on by exposure to a traumatic or shocking event.

After examining the case, Joe Nickell of the paranormal investigation group CSICOP concluded that the bright light in the sky reported by the witnesses on September 12 was most likely a meteor, that the pulsating red light was likely an aircraft navigation/hazard beacon, and that the creature described by witnesses closely resembled an owl. The latter two of which were distorted by the heightened state of anxiety felt by the witnesses after having observed the former. Nickell's conclusions are shared by a number of other investigators, including those of the Air Force. The Mothman has also been explained by this.

The night of the September 12 sighting, a meteor had been observed across three states, Maryland, Pennsylvania and West Virginia, and had been mistakenly reported as flaming aircraft crashing into the side of a hill at Elk River; approximately 11 miles southwest of the location of the Flatwoods sighting. Three flashing red aircraft beacons were also visible from the area of the sightings, possibly accounting for the pulsating red light seen by the witnesses, and for the red tint on the face of the creature.

The shape, movement, and sounds reported by witnesses was also consistent with the silhouette, flight pattern, and call of a startled barn owl perched on a tree limb; leading researchers to conclude that foliage beneath the owl may have created the illusion of the lower portions of the creature (described as being a pleated green skirt). Researchers also concluded that the witnesses' inability to agree on whether the creature had arms, combined with Kathleen May's report of it having "small, claw-like hands" which "extended in front of it" also matched the description of a barn owl with its talons gripping a tree branch. However, some have asked that if it was an owl then why did the witnesses not see it as such, even after shining a searchlight right at it. Many investigators have countered that this and the creature's supposed 'gliding' can be ascribed to hysteria and the heightened state of tension amongst the witnesses causing them to be panicky and irrational.

Alternative explanations included those put forward by the local media; that the September 12 group had witnessed the impact of a meteor which resulted in a man-shaped cloud of vapor, and those of Kathleen May and her sons (recorded some time after the incident); that they had seen some kind of covert government aircraft.