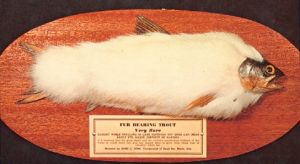 The fur-bearing trout (or furry trout) is a fictitious creature supposedly native to the northern regions of North America, particularly Canada, Montana, Wyoming, Colorado, and the Great Lakes.

The basic claim (or tall tale) is that the waters of lakes and rivers in the area are so cold that a species of trout has evolved which grows a thick coat of fur to maintain its body heat. Another theory, says that it is due to four jugs of hair tonic being spilled into the Arkansas River.

In reality, a possible source may have been a simple misunderstanding. A 17th century Scottish immigrant's letter to his relatives referring "furried animals and fish" being plentiful in the New World, followed by a request to procure a specimen of these "furried fish" to which the mischievous Scotsman readily complied by making one up, is often cited.

In fact, the "cotton mold" Saprolegnia will sometimes infect fish, causing tufts of fur-like growth to appear on the body. A heavy infection will result in the death of the fish, and as the fungus continues to grow afterwards, dead fish that are largely covered in the white "fur" can occasionally be found washed ashore.

The hoax can be unequivocally documented to go back to at least the 1930s. For example, here's an excerpt from an article in the Puebloan Chieftain dating back to November 15, 1938:

Old-timers living along the Arkansas River near Salida have told tales for many years of the fur-bearing trout indigenous to the waters of the Arkansas near there.

Tourists and other tenderfeet in particular have been regaled with accounts of the unusual fish, and Salidans of good reputation have been wont to relate that the authenticity of their stories has never been questioned—in fact, they're willing to bet it's never even been suspected.

Then, last week, out of Pratt, Kansas, where water in any quantity large enough to hold a trout—fur-bearing or otherwise—is a rarity, came an urgent request for proof of the existence of the furry fin flappers.

Upon the sturdy shoulders of Wilbur B. Foshay, secretary of the Chamber of Commerce, fell the delicate task of informing the credulous Kansan, without detracting from the obvious tourist-attracting qualities of the pelted piscatorial prizes.

With admirable diplomacy, and considerable aplomb, Foshay dispatched posthaste a photograph of the fish, obtained from a Salida photographer and told the Kansan to use his own judgment as to the authenticity of the species. The photograph sent has been available in Salida for some time. 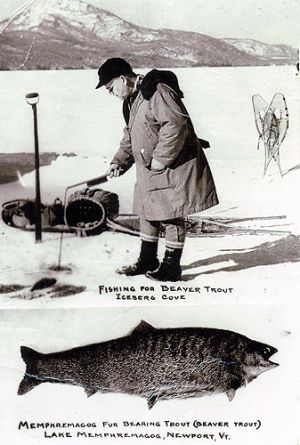 A postcard from Vermont (USA)

Stuffed and mounted specimens of these fish can be found in a number of museums of curiosities. These are made-up; the Saprolegnia "fur" cannot be preserved by taxonomy, and heavily overgrown fish are usually found only after they have already started to decay.

The fur-bearing trout and people's gullible reaction to it was part of a scene in the French movie Brotherhood of the Wolf. The Fur Bearing Trout also appeared in 2 episodes of the Earthworm Jim TV Series in an episode where Jim went on a roadtrip to find it and save it from Queen Slug for a Butt and another episode where Jim had to stop the anti-fish from eating the great worm spirit.