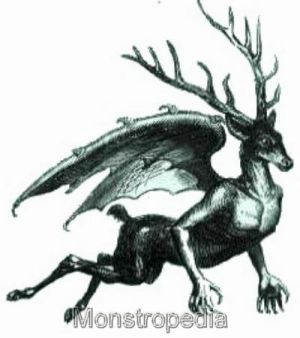 In demonology, Furfur (or Furtur) is a powerful Great Earl of Hell.

'Furfur' or 'furfures' in Latin means "bran". However it seems more likely that the name is a corruption of 'Furcifer' the Latin word for scoundrel.

Furfur is a Count or Earl of Hell who rules 26 legions.

Furfur appears as an angel or a stag with a flaming tail and speaks only lies unless enclosed in a triangle. To some authors he changes from hart into angel when compelled to enter the magic triangle. He would speak in a raucous voice

Furfur is a liar unless compelled to enter a magic triangle where he gives true answers to every question, speaking with a rough voice. Furfur causes love between a man and a woman, creates storms, tempests, thunder, lightning, and blasts, and teaches on secret and divine things.

Furfur is a great earle, appearing as an hart, with a firie taile, he lieth in everie thing, except he be brought up within a triangle; being bidden, he taketh angelicall forme, he speaketh with a hoarse voice, and willinglie maketh love betweene man and wife; he raiseth thunders and lightnings, and blasts. Where he is commanded, he answereth well, both of secret and also of divine things, and hath rule and dominion over six and twentie legions. Pseudomonarchia daemonum - Johann Wier (1583)

The Thirty-fourth Spirit is Furfur. He is a Great and Mighty Earl, appearing in the Form of an Hart with a Fiery Tail. He never speaketh truth unless he be compelled, or broughtup within a triangle. Being therein, he will takeupon himself the Form of an Angel. Being bidden, he speaketh with a hoarse voice. Also he will wittingly urge Love between Man and Woman. He can raise Lightnings and Thunders, Blasts, and Great Tempestuous Storms. And he giveth True Answers both of Things Secret and Divine, if commanded. He ruleth over 26 Legions of Spirits. And his Seal is this, etc. Goetia - S. L. MacGregor Mathers (1904)