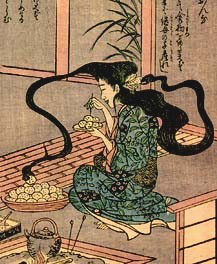 An image of a futakuchi-onna from the Ehon Hyaku Monogatari

In Japanese mythology, the futa-kuchi-onna (二口女 lit. "two-mouthed woman") is a woman afflicted with a curse or supernatural disease that transforms her into a yokai.

Futa-kuchi-onna are normal women who end up having two mouths - a normal one located on her face and second one on the back of the head beneath the hair. There, the woman's skull splits apart forming lips, teeth and a tongue, creating an entirely functional second mouth. Eventually the woman's hair begins to move like a pair of serpents, allowing the mouth to help itself to the woman's meals.

In Japanese mythology and folklore, the futakuchi-onna belongs to the same class of stories as the rokurokubi, kuchisake-onna and the yama-uba, women afflicted with a curse or supernatural disease that transforms them into yokai. The supernatural nature of the women in these stories is usually concealed until the last minute, when the true self is revealed.

Origins of the second mouth

Though there are several stories linking the appearance of a futakuni-onna's second mouth to different causes, it is most often linked to how little a woman eats. The soon-to-be futakuchi-onna is usually a wife of a miser and rarely eats. To counteract this, a second mouth mysteriously appears on the back of the woman's head. The second mouth often mumbles spiteful and threatening things to the woman and demands food. While no food passes through her normal lips, the mouth in the back of her head consumes twice what the other one would. If it is not fed, it can screech obscenely and cause the woman tremendous pain.

In another story, the extra mouth is formed when a stingy woman is accidentally hit in the head by her husband's axe while he is chopping wood, and the wound never heals. Other stories have the woman as a mother who lets her stepchild die of starvation while keeping her own offspring well fed; presumably, the spirit of the neglected child lodges itself in the stepmother's body to exact revenge.

In a small village there lived a stingy miser who, because he could not bear the expense of paying for food for a wife, lived entirely by himself.

One day he met a woman who did not eat anything, whom he immediately took for his wife. Because she never ate a thing, and was still a hard worker, the old miser was extraordinarily thrilled with her, but on the other hand he began to wonder why his stores of rice were steadily decreasing.

One day the man pretended to leave for work, but instead stayed behind to spy on his new wife. To his horror, he saw his wife’s hair part on the back of her head, her skull split wide revealing a gaping mouth. She unbound her hair, which reached out like tentacles to grasp the rice and shovel it into the hungry mouth.