In demonology, Gaap ( also known as Goap or Tap) is a mighty Prince and Great President of Hell, 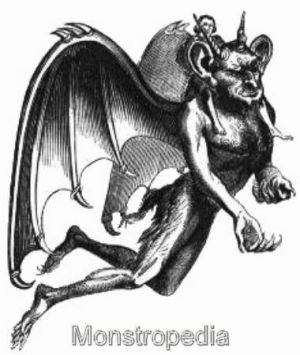 Gaap is a mighty Prince and Great President of Hell and commands sixty-six legions of demons. He is, according to The Lesser Key of Solomon, the king and prince of the southern region of Hell and Earth, and according to the Pseudomonarchia Daemonum the king of the western region and as mighty as Beleth, but for both he is the guide of the four kings (the others being Ziminiar, Corson and Amaymon, although some translations of The Lesser Key of Solomon consider Belial, Beleth, Asmodai and Gaap, not giving detail on the cardinal point they rule). Gaap specifically controls the element of water and reigns over the Water Elementals or the 'water demons'.

Gaap teaches Philosophy and all liberal sciences, can cause love or hate and make men insensible and invisible, deliver familiars out of the custody of other magicians, teaches how to consecrate those things that belong to the dominion of Amaymon his king (there is a contradiction here, see above), gives true answers concerning past, present and future, and can carry and re-carry men and things speedily from one nation to another at the conjurer's will. According to a few authors he can make men ignorant. He is said to be better conjured to appear when the Sun is in a southern zodiacal sign. According to Pseudomonarchia Daemonum certain necromancers honour him with sacrifices and burning offerings.

Tap/Gaap is a high president and prince of hell, commanding 4 of the principal kings and 60 legions, and as powerful as Byleth. He also has an empire over those demons Amaymon commands. He appears in human form at noon, and is said to intensify the passions of love and hatred, and can transport men to different countries. Earlier necromancers invoked Tap by spells composed by King Solomon, but that is not true, as it was Noah's son, Cham, who first began evoking evil spirits. The necromancers also offered him libations and holocausts. Tap was made to serve Byleth by composing a book of mathematics. If the exorcist knows of the art of Byleth, Gaap will not cooperate. Another book attributed to the prophets Eli and Elijah states that Gaap can be conjured by virtue of the saints' names of God listed in the Key of Solomon. Dictionnaire Infernal - Collin de Plancy (1863)

Gaap, alias Tap, a great president and a prince, he appeareth in a meridionall signe, and when he taketh humane shape he is the guide of the foure principall kings, as mightie as Bileth. There were certeine necromancers that offered sacrifices and burnt offerings unto him; and to call him up, they exercised an art, saieng that Salomon the wise made it. Which is false: for it was rather Cham, the sonne of Noah, who after the floud began first to invocate wicked spirits. He invocated Bileth, and made an art in his name, and a booke which is knowne to manie mathematicians. There were burnt offerings and sacrifices made, and gifts given, and much wickednes wrought by the exorcists, who mingled therewithall the holie names of God, the which in that art are everie where expressed. Marie there is an epistle of those names written by Salomon, as also write Helias Hierosolymitanus and Helisæus. It is to be noted, that if anie exorcist have the art of Bileth, and cannot make him stand before him, nor see him, I may not bewraie how and declare the meanes to conteine him, bicause it is abhomination, and for that I have learned nothing from Salomon of his dignitie and office. But yet I will not hide this; to wit, that he maketh a man woonderfull in philosophie and all the liberall sciences: he maketh love, hatred, insensibilitie, invisibilitie, consecration, and consecration of those things that are belonging unto the domination of Amaymon, and delivereth familiars out of the possession of other conjurors, answering truly and perfectly of things present, past, and to come, and transferreth men most speedilie into other nations, he ruleth sixtie six legions, and was of the order of potestats. Pseudomonarchia daemonum - Johann Wier (1583)