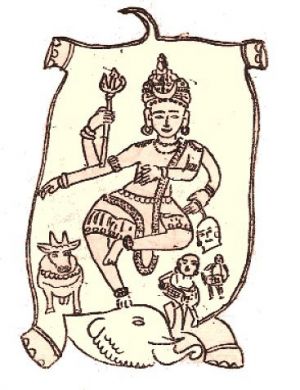 Lord Shiva terminates the tortures of Gajasura, the elephant demon. Picture from the Timeless Theater archives, based on an ancient temple sculpture.

In Hindu mythology, Gajasura (Sanskrit: गजासुर)(elephant demon) is the name used to refer to demon Nila who entered the body of an elephant and attacked Shiva.

Shiva, not wanting to hurt the innocent elephant, decided the kill the demon from within the elephant. Shiva too entered the elephant and performed the cosmic dance, Tandava, thus killing the demon Gajasura. This earned the lord the title of Gajasuramardhana.

The ancient temple at Halebidu, depicts the battle scene in the form of a sculpture on the main temple wall. The sculpt is known for its highly intricate work. Notable, is the thumbnail protruding near one of the hind legs from within the elephant. 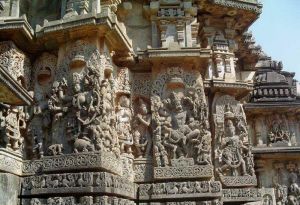 Lord Shiva is carved above the elephant.
Retrieved from "https://www.monstropedia.org/index.php?title=Gajasura&oldid=14411"
Category: