The gargouille was a mythological water dragon originating from France. 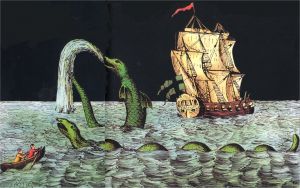 The Gargouille is described as a colossal monster with a long neck, a slender snout and eyes greaming like moonstones.

From the waters of the river Seine, a monster with a great scaled head appears one day and starts mercilessly saturating the land until the entire region is flooded. In legend, Saint Romain, the archbishop of Rouen, lured the monster to shore using a convict, and then made a cross with his fingers to tame the monster. This gesture immediately tames the Gargouille. He then led it into town where it was slaughtered. Some accounts say it was burned.

The creature was then said to have been carved onto buildings to be used as water drainage, therefore creating the modern "gargoyle". It is similarly accounted that they have no relation other than their water-spouting abilities, leading to the words' similarities.

The taming and destruction of the creature is similar to that of The Tarasque and Peluda.